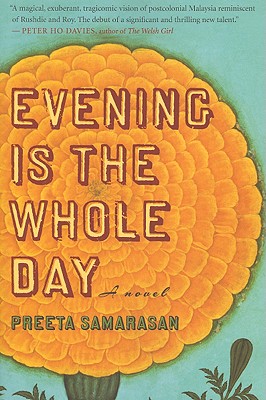 Evening Is The Whole Day

Set in Malaysia, this spellbinding and already internationally acclaimed debut introduces us to the prosperous Rajasekharan family as its closely guarded secrets are slowly peeled away.

When Chellam, the family’s rubber-plantation-bred servant girl, is dismissed for unnamed crimes, her banishment is the latest in a series of recent, precipitous losses that have shaken six-year-old Aasha’s life. A few short weeks before, Aasha’s grandmother Paati passed away under mysterious circumstances and her older sister, Uma, departed for Columbia University—leaving Aasha alone to cope with her mostly absent father, her bitter mother, and her imperturbable older brother.

Beginning with Aasha’s grandfather’s ascension from Indian coolie to illustrious resident of the Big House on Kingfisher Lane, and going on to tell the story of how Appa, the family’s Oxford-educated patriarch, courted Amma, the humble girl next door, Evening Is the Whole Day moves gracefully backward and forward in time to answer the many questions that haunt the family: What was Chellam’s unforgivable crime? Why was Uma so intent on leaving? How and why did Paati die? What did Aasha see? And, underscoring all of these mysteries: What ultimately became of Appa’s once-grand dreams for his family and his country?

Sweeping in scope, sumptuously lyrical, and masterfully constructed, Evening Is the Whole Day offers an unflinching look at relationships between parents and children, brothers and sisters, the wealthy and the poor, a country and its citizens—and the ways in which each sometimes fails the other. Illuminating in heartbreaking detail one Indian immigrant family’s secrets and lies while exposing the complex underbelly of Malaysia itself, Preeta Samarasan’s debut is a mesmerizing and vital achievement sure to earn her a place alongside Arundhati Roy, Kiran Desai, and Zadie Smith.

Praise For Evening Is The Whole Day…

“... a surpassingly wise and beautiful debut novel about the tragic consequences of the inability to love.” Booklist, ALA, Starred Review

"(a) delicious first novel...Samarasan's fabric is gorgeous. Her ambitious spiraling plot, her richly embroidered prose, her sense of place, and her psychological acuity are stunning. Readers, responding to the setting, will immediately compare her to Kiran Desai. I think Smarasan's dialogue and description are reminiscent of Eudora Welty, another woman who knew how to write about family and race and class and secrets and heat." The New York Times Book Review —

PREETA SAMARASAN was born and raised in Malaysia, but moved to the United States in high-school. She received her M.F.A. from the University of Michigan and was the recipient of the Asian American Writer’s Workshop/Hyphen Magazine short-story award.