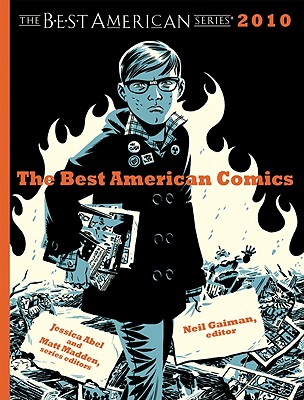 The Best American Comics showcases the work of both established and up-and-coming contributors. Editor Neil Gaiman—one of the top writers in modern comics and the award-winning author of novels and children’s books—has culled the best stories from graphic novels, pamphlet comics, newspapers, magazines, mini-comics, and the Internet to create this cutting-edge collection. With entries from luminaries such as Tim Hensley, Michael Kupperman, and Dash Shaw, “it’s hard to flip through this book without finding a lot worth reading (and rereading)” (The Onion, A.V. Club).

NEIL GAIMAN is the critically acclaimed and best-selling author of the novels American Gods, Anansi Boys , and Neverwhere. Gaiman was the creator/writer of cult DC Comics horror-weird series The Sandman, which won twenty-four Will Eisner Comic Industry Awards, including the award for best writer four times, and three Harvey Awards. He is also the author of several children’s books, including The Graveyard Book, winner of the 2009 Newbery Medal, and Coraline, an international bestseller that was turned into an animated film and released in 2009. Among his many awards are the Hugo, the Nebula, and the Bram Stoker Award.


MATT MADDEN is a cartoonist and the author of 99 Ways to Tell a Story: Exercises in Style. Together, they are the authors of Drawing Words & Writing Pictures.
Loading...
or
Not Currently Available for Direct Purchase