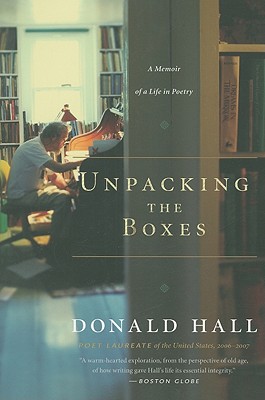 A Memoir of a Life in Poetry

Donald Hall’s remarkable life in poetry — a career capped by his appointment as U.S. poet laureate in 2006 — comes alive in this richly detailed, self-revealing memoir.

Hall’s invaluable record of the making of a poet begins with his childhood in Depression-era suburban Connecticut, where he first realized poetry was “secret, dangerous, wicked, and delicious,” and ends with what he calls “the planet of antiquity,” a time of life dramatically punctuated by his appointment as poet laureate of the United States.
Hall writes eloquently of the poetry and books that moved and formed him as a child and young man, and of adolescent efforts at poetry writing — an endeavor he wryly describes as more hormonal than artistic. His painful formative days at Exeter, where he was sent like a naive lamb to a high WASP academic slaughter, are followed by a poetic self-liberation of sorts at Harvard. Here he rubs elbows with Frank O’Hara, John Ashbery, and Edward Gorey, and begins lifelong friendships with Robert Bly, Adrienne Rich, and George Plimpton. After Harvard, Hall is off to Oxford, where the high spirits and rampant poetry careerism of the postwar university scene are brilliantly captured.
At eighty, Hall is as painstakingly honest about his failures and low points as a poet, writer, lover, and father as he is about his successes, making Unpacking the Boxes — his first book since being named poet laureate — both revelatory and tremendously poignant.