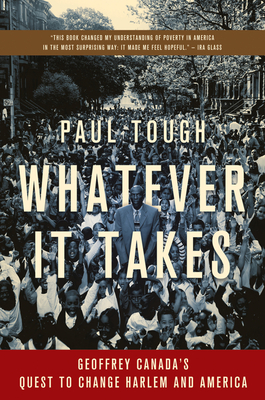 New York Times bestselling author Paul Tough's Whatever It Takes is "one of the best books ever written about how poverty influences learning, and vice versa" (The Washington Post).

What would it take?

That was the question that Geoffrey Canada found himself asking. What would it take to change the lives of poor children — not one by one, through heroic interventions and occasional miracles, but in big numbers, and in a way that could be replicated nationwide? The question led him to create the Harlem Children’s Zone, a ninety-seven-block laboratory in central Harlem where he is testing new and sometimes controversial ideas about poverty in America. His conclusion: if you want poor kids to be able to compete with their middle-class peers, you need to change everything in their lives — their schools, their neighborhoods, even the child-rearing practices of their parents.

Whatever It Takes is a tour de force of reporting, an inspired portrait not only of Geoffrey Canada but also of the parents and children in Harlem who are struggling to better their lives, often against great odds. Carefully researched and deeply affecting, this is a dispatch from inside the most daring and potentially transformative social experiment of our time.

Praise For Whatever It Takes: Geoffrey Canada's Quest to Change Harlem and America…

“As Paul Tough shows, Canada is a man…who knows what it takes to ensure that every child has a fair shot in life.”--Bill Clinton

"Paul Tough shows, from the inside, how the nation's most important work gets done." – Adrian Nicole Leblanc

“Paul Tough takes on one of the biggest questions going: how do you teach people to be successful?”—Stephen Dubner

“[A] moving account of . . . giving Harlem’s children access to the same dreams as children in New York’s most privileged neighborhoods.”—Marian Wright Edelman

"[E]asily the most compelling and potentially the most important book on the problem of poverty in urban America in years."--Michael Pollan

"[A] must-read for any American committed to solving our nation's greatest social injustice"—Wendy Kopp, Teach for America

“The question of whether these terribly disadvantaged kids will fail or succeed takes on all the nail-biting urgency of any high-stakes, novelistic thriller.” —Elizabeth Gilbert

“[This] account of this visionary man in Harlem changed my understanding of poverty in America it …made me feel hopeful.”—Ira Glass

" [T]his book gives readers a solid look at the problems facing poor communities and their reformers, as well as good cause to be optimistic about the future."

"A remarkable book ... a story more gripping and inspiring than you'd imagine social policy could possibly be." Gentleman's Quarterly

"This unflinching book will motivate us all to take action and make our schools places of possibility and hope."--Essence

"This is an engrossing look at a visionary man and a bold experiment" Booklist, ALA, Starred Review —

PAUL TOUGH is the author of Helping Children Succeed and How Children Succeed, which spent more than a year on the New York Times hardcover and paperback bestseller lists and was translated into twenty-eight languages. He is also the author of Whatever It Takes: Geoffrey Canada’s Quest to Change Harlem and America. He is a contributing writer to the New York Times Magazine and a regular contributor to the public radio program This American Life. You can learn more about his work at paultough.com and follow him on Twitter: @paultough.