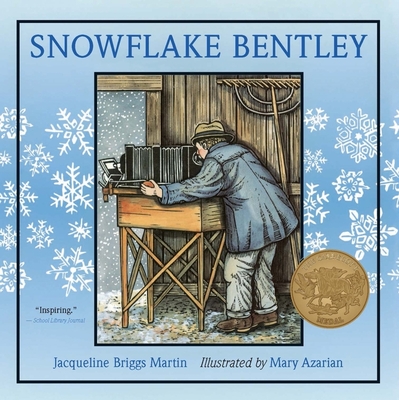 In this Caldecott Medal-winning picture book, the true story of Wilson Bentley and his singular fascination with snowflakes is rendered in rich prose and gorgeous artwork, perfect for the holidays, snow days, and everyday.

Wilson Bentley was always fascinated by snow. In childhood and adulthood, he saw each tiny crystal of a snowflake as a little miracle, and  wanted to understand them.

His parents supported his curiosity and saved until they could give him his own camera and microscope. At the time, his enthusiasm was misunderstood. But with patience and determination, Wilson catalogued hundreds of snowflake photographs, gave slideshows of his findings and, when he was 66, published a book of his photos. His work became the basis for all we know about beautiful, unique snowflakes today.

This  biographical tribute to a very special farmer is the perfect holiday gift or snow day read.

"A warm period look at a cold subject - snow - and one self-made scientist, Wilson A. Bentley, affectionately know as Snowflake. . . . The book exhibits a beautiful blend of Azarian's splendid woodcuts, a lyrical text, and factual sidebars. Bentley's dedication to his research is clearly evident, and the ridicule to which he was sometimes subjected is appropriately downplayed for a young audience. The illustrations, tinted with watercolors, depict the people, homes, meadows, and woods of turn-of-the-century Vermont countryside in accurate detail. Sources for the factual material are credited, and a final page features photographs of Bentley at work and three of his actual snowflake slides." Horn Book

"Wilson Bentley was fascinated by snow, in childhood and adulthood, and, practically speaking, is the one who 'discovered' snow crystals, by photographing them in all their variation. As a youngster, he was so taken with these little six-sided ice crystals that his parents scraped together their savings to buy him a camera with a microscope. From then on, despite his neighbors' amusement, he took hundreds of portraits of snowflakes. As an adult, he gave slide shows of his work, and when he was 66, a book was published of his photos - a book that is still in use today. Martin chronicles Bentley's life and his obsession in a main, poetic text, but provides additional facts in careful, snowflake-strewn sidebars. . . . This is a lyrical biographical tribute to a farmer, whose love of snow and careful camera work expanded both natural science and photography." Kirkus Reviews

"This picture-book biography beautifully captures the essence of the life and passion of Wilson A. Bentely. . . . The story of this man's life is written with graceful simplicity. . . . An inspiring selection." School Library Journal

Jacqueline Briggs Martin is the author of Snowflake Bentley, winner of the 1999 Caldecott Medal, and The Lamp, the Ice, and the Boat Called Fish, an ALA Notable Book, a Bulletin Blue Ribbon Book, Riverbank Review Finalist, Notable Social Studies Trade book and winner of The Golden Kite Award for Illustration. She grew up on a farm in Maine much like the one in this story. She lives in Mt. Vernon, Iowa.

Caldecott Medalist Mary Azarian is a consummate gardener and a skilled and original woodblock artist. Many of her prints are heavily influenced by her love of gardening, and her turn-of-the-century farmhouse is surrounded by gardens that reveal an artist's vision. Mary Azarian received the 1999 Caldecott Medal for SNOWFLAKE BENTLEY, written by Jacqueline Briggs Martin. She lives, skis, and gardens in Vermont.
Loading...
or support indie stores by buying on