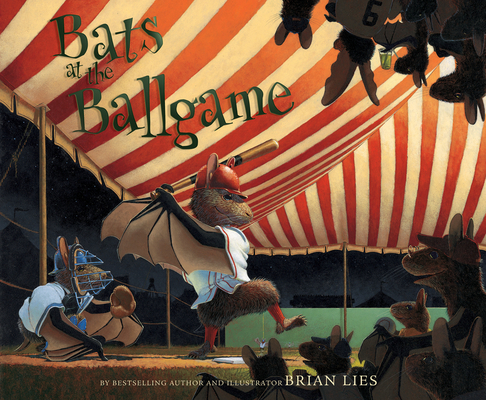 Bats at the Ballgame (A Bat Book)

Hurry up!  Come one—come all!
We’re off to watch the bats play ball!

You’ll never forget your first game: the green so green, the presence of heroes past, and togetherness with family and friends, rooting for the home team.

But you think humans are the only ones who enjoy America’s national pastime? Grab your bat—the other kind—and your mitt, and join these captivating bats as they flutter off to watch their all-stars compete. How about a mothdog?  Or some Cricket Jack?

In sweeping compositions that transport fans to the rightside-up and upside-down world of bats at play, Brian Lies treats us to a whole new ballgame.


Praise For Bats at the Ballgame (A Bat Book)…

"Baseball stadiums have an innate magic, never more so than in the hands of Lies, whose latest has the winged creatures gathering for an epic game, complete with 'beenuts and Cricket Jack,' and an upside down audience" —Publishers Weekly, starred review

"The visual effect is quite stunning, with some fantastically disorienting upside-down spreads to reflect the fans' hanging position, and much of the language is utterly delicious."—Kirkus Reviews, starred review

Bats at the Beach

"Perfect for sharing with younglings of the wingless sort." —Kirkus Reviews

"The book truly soars in the dark yet luminescent art. . . . A grand adventure." —School Library Journal

Bats at the Library

"The library-after-dark setting works a magic all its own, taking Lies and his audience to an intensely personal place." —Publishers Weekly, starred review

"[Lies] brings a sure, expressive and transporting hand to this story of a colony of bats paying a nighttime visit to a small-town library." —Kirkus Reviews

"Illustrations teem with bats so charming they will even win over chiroptophobes." —Booklist

"Another tale of bat mischief . . . the charm is all in the story itself." —New York Times Book Review

Brian Lies is the Caldecott honor-winning author-illustrator of New York Times bestsellers Bats at the Beach, Bats at the Library, Bats at the Ballgame, and Bats in the Band. He has written and illustrated more than twenty books for children. Born in Princeton, New Jersey, Brian lives on the South Shore of Massachusetts with his family.
www.BrianLies.com