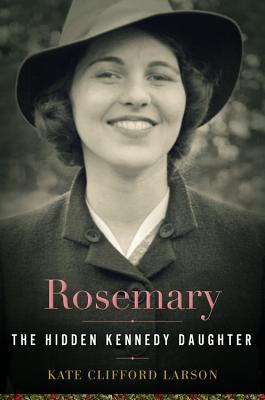 They were the most prominent American family of the twentieth century. The daughter they secreted away made all the difference.

Joe and Rose Kennedy’s strikingly beautiful daughter Rosemary attended exclusive schools, was presented as a debutante to the Queen of England, and traveled the world with her high-spirited sisters. And yet, Rosemary was intellectually disabled — a secret fiercely guarded by her powerful and glamorous family.
Major new sources — Rose Kennedy’s diaries and correspondence, school and doctors' letters, and exclusive family interviews — bring Rosemary alive as a girl adored but left far behind by her competitive siblings. Kate Larson reveals both the sensitive care Rose and Joe gave to Rosemary and then — as the family’s standing reached an apex — the often desperate and duplicitous arrangements the Kennedys made to keep her away from home as she became increasingly intractable in her early twenties. Finally, Larson illuminates Joe’s decision to have Rosemary lobotomized at age twenty-three, and the family's complicity in keeping the secret.
Rosemary delivers a profoundly moving coda: JFK visited Rosemary for the first time while campaigning in the Midwest; she had been living isolated in a Wisconsin institution for nearly twenty years. Only then did the siblings understand what had happened to Rosemary and bring her home for loving family visits. It was a reckoning that inspired them to direct attention to the plight of the disabled, transforming the lives of millions.

The forgotten Kennedy is forgotten no longer. ROSEMARY is a rare thing, a book about the Kennedys that has something new to say.
—Laurence Leamer, author of The Kennedy Women

In her engaging and compassionate ROSEMARY: THE HIDDEN KENNEDY DAUGHTER, Kate Larson illuminates the poignant story of a resolute girl falling behind in a glamorous and competitive family. Rosemary's own story comes alive against the broader and often shocking background of 20th-century attitudes toward the intellectually disabled, and sheds fascinating light on how the characters of Rose Kennedy, Joe Kennedy, and Rosemary's famous siblings were indelibly shaped by her determined yet tragic life.
—Will Swift, author of The Kennedys Amidst the Gathering Storm


Kate Clifford Larson delivers an engrossing portrait of Rose and Joe Kennedy’s tragic misunderstanding of their oldest daughter’s capabilities, and of how her fate changed the Kennedy family forever.  And yet it is Rosemary herself who shines from the pages of this profoundly revealing family story.
—Marya Hornbacher, author of Madness:  A Bipolar Life

"A biography that chronicles her life with fresh details . . . What makes this story especially haunting are the might-have-beens . . . The first biographer to have access to all of Rosemary’s known letters, replete with typos and lopsided sentence structure, Larson deploys excerpts in heart-rending fashion . . . By making Rosemary the central character, [Larson] has produced a valuable account of a mental health tragedy, and an influential family’s belated efforts to make amends."
-- The New York Times Book Review

"A fascinating glipmse at a family whose public story was carefully cultivated and managed...Personal and compelling."-- Minneapolis Star-Tribune

"A heartbreaking book that makes clear the pain and passion behind the Kennedy family’s efforts on behalf of the disabled.”
-- BBC.com

"Fascinating but heartbreaking reading . . . [with] questions that will haunt the reader long after the last page is turned."
--BookPage

"Well-researched and fascinating . . . Heartbreaking and illuminating, this will serve not only Kennedy fans but also those curious about the history of disabilities in the U.S.”
-- Booklist

“[Larson] succeeds in providing a well-rounded portrait of a woman who, until now, has never been viewed in full,” —  Boston Globe

"Larson's style is so vivid and powerful that we want to read it through spread finegrs like a jury looking at autopsy photos. I was wiped out when I finished the book." - National Review