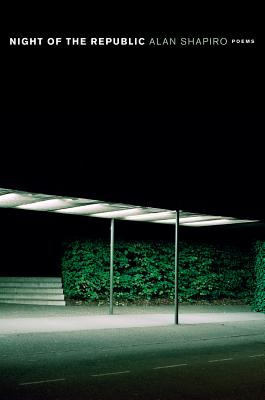 Night of the Republic

In Night of the Republic, Alan Shapiro takes us on an unsettling night tour of America’s public places—a gas station restroom, shoe store, convention hall, and race track among others—and in stark Edward Hopper–like imagery reveals the surreal and dreamlike features of these familiar but empty night spaces. Shapiro finds in them not the expected alienation but rather an odd, companionable solitude rising up from the quiet emptiness.

In other poems, Shapiro writes movingly of his 1950s and 60s childhood in Brookline, Massachusetts, with special focus on the house he grew up in. These meditations, always inflected with Shapiro’s quick wit and humor, lead to recollections of tragic and haunting events such as the Cuban missile crisis and the assassination of JFK. While Night of the Republic is Shapiro’s most ambitious work to date, it is also his most timely and urgent for the acute way it illuminates the mingling of private obsessions with public space.

ALAN SHAPIRO is the William R. Kenan Jr. Distinguished Professor of English and Creative Writing at the University of North Carolina, Chapel Hill. He is a former recipient of the Kingsley Tufts Award and the Los Angeles Book Prize, was a finalist for the National Book Critics Circle Award, and is a fellow in the American Academy of Arts and Sciences.
Loading...
or
Not Currently Available for Direct Purchase