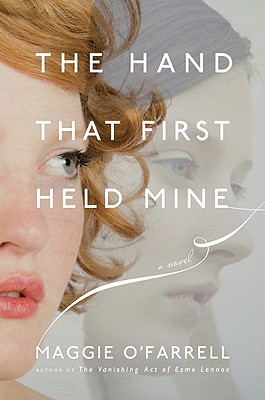 The Hand That First Held Mine

“Alternating chapters tell the story of two women in London in two very different times: Lexie, the journalist in post-war London, and Elina, a new mother struggling with her baby and her boyfriend in the present day. The portraits of these women are spellbinding in their depth of understanding, and the way O'Farrell weaves them together is dazzling.”
— Jude Sales, Readers' Books, Sonoma, CA
View the List

Lexie Sinclair is plotting an extraordinary life for herself.

Hedged in by her parents' genteel country life, she plans her escape to London. There, she takes up with Innes Kent, a magazine editor who wears duck-egg blue ties and introduces her to the thrilling, underground world of bohemian, post-war Soho. She learns to be a reporter, to know art and artists, to embrace her life fully and with a deep love at the center of it. She creates many lives--all of them unconventional. And when she finds herself pregnant, she doesn't hesitate to have the baby on her own terms.

Later, in present-day London, a young painter named Elina dizzily navigates the first weeks of motherhood. She doesn't recognize herself: she finds herself walking outside with no shoes; she goes to the restaurant for lunch at nine in the morning; she can't recall the small matter of giving birth. But for her boyfriend, Ted, fatherhood is calling up lost memories, with images he cannot place.

As Ted's memories become more disconcerting and more frequent, it seems that something might connect these two stories-- these two women-- something that becomes all the more heartbreaking and beautiful as they all hurtle toward its revelation.

"The Hand That First Held Mine "is a spellbinding novel of two women connected across fifty years by art, love, betrayals, secrets, and motherhood. Like her acclaimed "The Vanishing Act of Esme Lennox," it is a "breathtaking, heart-breaking creation."*And it is a gorgeous inquiry into the ways we make and unmake our lives, who we know ourselves to be, and how even our most accidental legacies connect us.


Praise For The Hand That First Held Mine…

"O’Farrell brings to mind Sue Miller but with a British and darker flavor; her sure hand for psychological suspense . . . continues to be most impressive." —Library Journal

"Maggie O’Farrell’s cinematically vivid novel is moody and powerful and plotted at a breakneck pace. This book, like life, will disarm you with its unannounced twists and tragedies and moments of unexpected beauty. She delivers to readers that rarest of experiences—total emotional investment. Hers is a brilliant feat of prose marksmanship—also, it made me cry on the subway." —Heidi Julavits, author of The Effect of Living Backwards and The Uses of Enchantment  "Maggie O’Farrell knows how to weave a bewitching tale, both thrilling and poetic. The Hand That First Held Mine will no doubt enrapture you, just as it has me." —Tatiana de Rosnay, author of Sarah’s Key"An exquisitely sensual tale of love, motherhood, and other forms of madness, The Hand That First Held Mine will unsettle, move, and haunt you." —Emma Donoghue, author of Slammerkin"Maggie O’Farrell deftly depicts the long-after shocks of death, betrayal, and life-changing love as her richly complicated characters play out an immensely satisfying plot. The Hand That First Held Mine is a dazzling and absorbing novel." —Margot Livesey, author of The House on Fortune Street  "Maggie O’Farrell is an uncommonly perceptive writer, and The Hand That First Held Mine is an unforgettable story of family, ambition, and love. I couldn’t stop thinking about it long after I read the final page." —Lauren Grodstein, author of A Friend of the Family