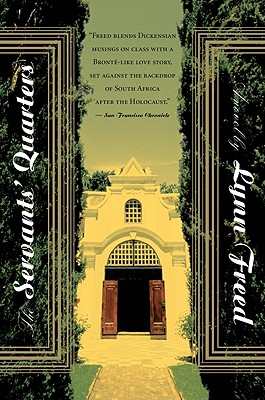 The Servants’ Quarters, a complex and sophisticated love story, evokes a vanishing world of privilege with a Pygmalion twist. Haunted by phantoms of the Second World War and the Holocaust, young Cressida lives in terror of George Harding, who, severely disfigured, has returned from the front to recover in his family’s stately African home. When he plucks young Cressida’s beautiful mother and her family from financial ruin, establishing them in the old servants’ quarters of his estate, Cressida is swept into a future inexorably bound to his. In the new setting, she finds that she is, after all, indentured. She is conscripted to enliven George Harding’s nephew, the hopelessly timid Edgar, to make him "wild and daring." And she takes on this task with resentful fury, leading the boy astray and, in the process, learning to manipulate differences in power, class, background, and ambition. Only slowly does she come to understand that George Harding himself is watching her. And waiting.


Praise For The Servants' Quarters…

"The Servant's Quarters is Lynn Freed's best novel yet. Cressida, a young girl who watches those around her patch up their wounds from the war and carry on with the weight of pretense, is as observant and as wickedly truthful as any Jane Austen character." --Amy Tan

LYNN FREED was awarded the inaugural Katherine Anne Porter Award for fiction by the American Academy of Arts and Letters. She is the author of six novels, a short story collection, and a collection of essays.