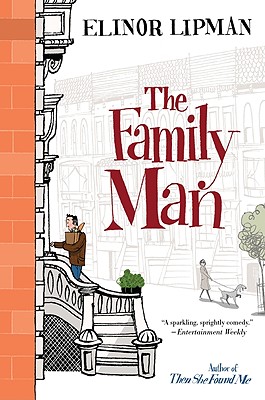 “The Family Man is a charming, funny tale of a gay father reconnecting with his hapless ex-wife and aspiring actress stepdaughter. Witty and urbane, Lipman's latest showcases endearing characters and a storyline that satirizes our fascination with celebrity while it reassures us of the endurance of love and good intentions.”
— Linda Bubon, Women & Children First, Chicago, IL
View the List

A hysterical phone call from Henry Archer’s ex-wife and a familiar face in a photograph upend his well-ordered life and bring him back into contact with the child he adored, a short-term stepdaughter from a misbegotten marriage long ago. Henry is a lawyer, an old-fashioned man, gay, successful, lonely. Thalia is now twenty-nine, an actress-hopeful, estranged from her newly widowed eccentric mother—Denise, Henry’s ex. Hoping it will lead to better things for her career, Thalia agrees to pose as the girlfriend of a horror-movie luminary who is down on his romantic luck. When Thalia and her complicated social life move into the basement of Henry’s Upper West Side townhouse, she finds a champion in her long-lost father, and he finds new life—and maybe even new love—in the commotion.

ELINOR LIPMAN is the award-winning author of eleven novels, including The View from Penthouse B and The Inn at Lake Devine; one essay collection, I Can’t Complain; and Tweet Land of Liberty: Irreverent Rhymes from the Political Circus. She lives in New York City.

Consider the novel’s title. What does it take to be a good family man? Is DNA irrelevant in parenting? What makes Henry and Thalia an ideal father-daughter team?

If you were a judge evaluating Denise and Glenn’s pre-nup (before the revelations at the end of the book), would you rule in her favor? Would the Polaroids have helped?

What was the basis of Henry’s friendship with Celeste? What made Henry more comfortable with her than with anyone else?

If you had been Todd, would you have come out to Lillian sooner? Were you surprised to discover how progressive she was? Why was she worried that Todd would not be able find anyone to love him?

What does Thalia’s faux relationship with Leif say about the public’s expectations of what a typical celebrity love affair should be? Do fans prefer celebrities who have volatile private lives?

How would The Family Man unfold if it were told from Dr. Abrams’s point of view? What would her assessment of Henry’s state of mind (and the sanity of those around him) be?

What draws Denise and Eddie together? How is he different from Glenn? What aspects of her personality are reflected in her various men?

Were you surprised to discover the truth about the carton factory, or were you suspicious from the beginning? How did the revelations affect your opinion of Glenn Senior?

Why is Denise so cranky, even when she isn’t living under the cloud of looming financial loss? Who are the Denises in your life? What does it take to cheer them up?

Why is it so appropriate that some of the characters in this novel are immersed in the film industry? Which characters do the most “acting,” even if they are not aspiring to become professional actors?

What enables Henry to remain ethical as an attorney? Are attorneys the villains or the heroes in this novel?

What is Philip’s role in Thalia’s life? As her friendship with him evolves throughout the novel, how does it reflect her own transformation?

What is it like for Glenn Junior to live in his father’s shadow? How does his impression of his father change as he becomes embroiled in feuds over the estate? Has your family ever been embroiled in a similar feud? What alliances were broken and forged as a result?

Thalia is a born publicist and actress and will clearly succeed in those endeavors. Will these skills help her be a good mother too? How will her parenting style be affected by her childhood memories?

From a workaholic surgical intern The Pursuit of Alice Thrift to a Latin teacher reunited with her birth mother Then She Found Me (now a motion picture), Elinor Lipman’s characters explore love in its many forms. What truths about relationships are woven throughout The Family Man and previous Lipman works that you have read? What makes her wit unique?