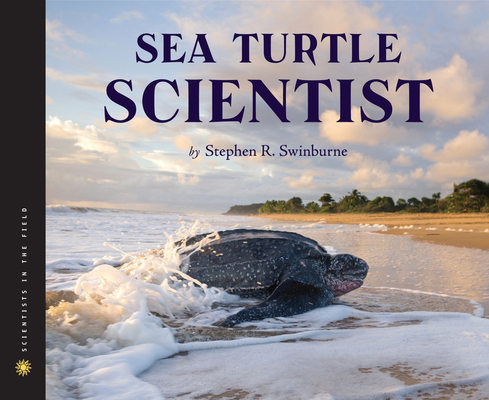 Dr. Kimberly Stewart, also known as the Turtle Lady of St. Kitts, is already waiting at midnight when an 800-pound leatherback sea turtle crawls out of the Caribbean surf and onto the sandy beach. The mother turtle has a vital job to do: dig a nest in which she will lay eggs that will hatch into part of the next generation of leatherbacks. With only one in a thousand of the eggs for this critically endangered species resulting in an adult sea turtle, the odds are stacked against her and her offspring. Join the renowned author and photographer Steve Swinburne on a journey through history to learn how sea turtles came to be endangered, and what scientists like Kimberly are doing to save them. For the complete selection of books in this critically acclaimed, award-winning series, visit www.sciencemeetsadventure.com.

Praise For Sea Turtle Scientist (Scientists in the Field Series)…

"The color illustrations feature numerous, remarkably fine photos, including many taken by Swinburne. Some of the pictures are too small to be effective, but most offer useful and beautiful views of the sea turtles and the scientist who studies them. An informative addition to science collections."
—Booklist

"Neophytes to this classic series who thought science was always conducted in old buildings on lab benches will be delighted to find it can take place in an island paradise."
—Bulletin * "This refreshing journey with a dedicated woman hard at work in her chosen field will resonate with readers. Inspiring."
—School Library Journal, starred review

STEPHEN SWINBURNE is the author of numerous children's books about nature, including Safe, Warm, and Snug, illustrated by Jose Aruego and Ariane Dewey, and Once a Wolf: How Wildlife Biologists Fought to Bring Back the Gray Wolf, with photographs by Jim Brandenburg. A lifelong naturalist, he lives in South Londonderry, Vermont.
Loading...
or support indie stores by buying on