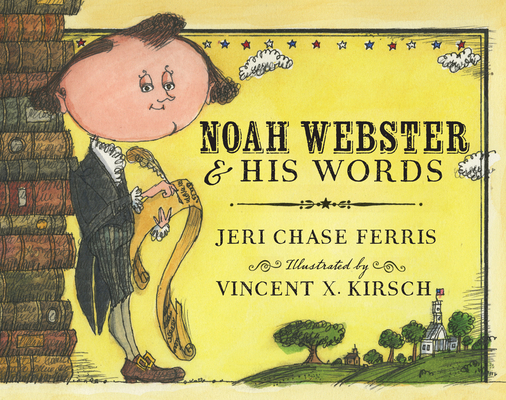 Noah Webster and His Words

Webster’s American Dictionary is the second most popular book ever printed in English. But who was that Webster? Noah Webster (1758–1843) was a bookish Connecticut farm boy who became obsessed with uniting America through language. He spent twenty years writing two thousand pages to accomplish that, and the first 100 percent American dictionary was published in 1828 when he was seventy years old. This clever, hilariously illustrated account shines a light on early American history and the life of a man who could not rest until he’d achieved his dream. An illustrated chronology of Webster’s life makes this a picture perfect bi-og-ra-phy [noun: a written history of a person's life].


Praise For Noah Webster and His Words…

"This informative book would be a great addition to dictionary lessons or to studies of the formation of the United States."
—School Library Journal, starred review

"A good deal more fun than the subject might suggest."
—Booklist

"The volume is a wonderful success in introducing Webster in such a charming manner."
—Kirkus

"The clever text, insertion of dictionary words, and hilarious illustrations make this a perfect book for everyone who loves words. This is a book to remember!"
—California Kids

"It's just as timely as old-timey — a charming book about a boy who preferred to read rather than do as his forefathers did."
—New York Times Book Review

"What really singles out this picture book is its ability to incorporate definitions within the text without sounding contrived."
—EW.com

Jeri Chase Ferris is the award-winning author of eleven biographies for children and young adults. She specializes in biographies of women and minorities - people who have done great and important deeds, but have been overlooked in history. "We all like to be treated fairly," Jeri says. "Many of the people I write about were not treated fairly. My books set the record straight."     She lives in California. This is her first book with Houghton Mifflin. Visit her website at www.jerichaseferris.com!

Vincent X. Kirsch is the author and illustrator who has worked with publishers such has Farrar, Straus, & Giroux, and Bloomsbury USA, where artwork for his first book Natalie and Naughtily was accepted into the 2008 Original Art Show at the Society of Illustrators in New York. He now lives in Los Angeles, California. Noah Webster and His Words is his first book with Houghton Mifflin.