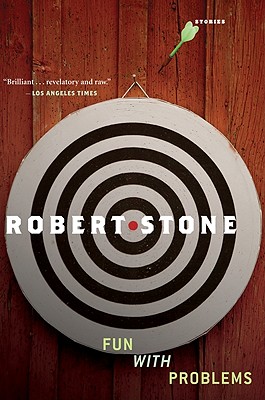 In Fun with Problems, Robert Stone demonstrates once again that he is "one of our greatest living writers" (Los Angeles Times). The pieces in this new volume vary greatly in length—some are almost novellas, others no more than a page—but all share the signature blend of longing, violence, black humor, sex and drugs that has helped Stone illuminate the dark corners of the human soul. Entire lives are laid out with remarkable precision, in captivating prose: a screenwriter carries on a decades-long affair with a beautiful actress, whose descent into addiction he can neither turn from nor share; a bored husband picks up a mysterious woman only to find that his ego has led him woefully astray; a world-beating Silicon Valley executive receives an unwelcome guest at his mansion in the hills; a scuba dive guides uneasy newlyweds to a point of no return. Fun with Problems showcases Stone's great gift: to pinpoint and make real the impulses—by turns violently coercive and quietly seductive—that cause us to conceal, reveal, and betray our very selves.

Praise For Fun With Problems…

"In the long form or the short, American fiction has no greater master than Robert Stone. These stories burn with his dark and incandescent magic."
--  Madison Smartt Bell, author of All Souls Rising  "Stone's evocative prose treads through the murky waters of dead dreams and waning hopes, bringing out the pathetic and nasty side of people warped by addiction, sex, violence and time...Stone doesn't just let his wounded characters whimper in the corner. He turns them loose on a world hard enough to knock them down but indifferent enough to not care about them once they're gone."
-- Publishers Weekly, starred   "[Stone] mines the depravity of weirdos whose success resides in having not died by the end of the story...The stories are witty and diverse and are all unified by some element of brokenness...Each character comes closer and closer to truth, but heartbreakingly, never quite turns the corner. You know they are on the right track though and that makes suffering with these characters enjoyable."
-- Booklist "Once again, Robert Stone displays his tense mastery of narrative, inexplicably fine dialogue, and what is perhaps the most sublime sense of any living writer for beginnings and endings. He is, simply, one of our best."
--Tom Bissell, author of The Father of All Things "Stone's pared, precise lines take on the lyrical authority of morality tales...There's a dark humor at play here, the laughter of the rehab houses implied in the title. Few other writers could use a phrase like civic poetry so conversationally and have it be so cogent."
-- Library Journal "In this ironically titled collection, prize-winning novelist Robert Stone delivers insightful and at times wickedly funny portraits of troubled characters sowing the seeds of their own downfall."
&nbs —