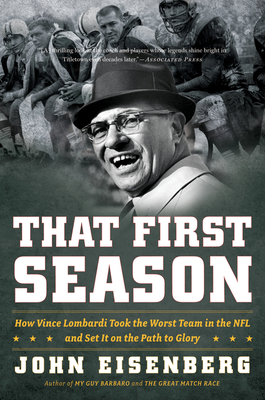 John Eisenberg's That First Season is the seldom-studied prequel to a phenomenal football career for Vince Lombardi and the Packers, drawing on exhaustive research and interviews to tell an incredible ensemble tale of a team, a town, and their leader.

The once-vaunted Green Bay Packers were a laughing stock by the late 1950s. They hadn't fielded a winning team in more than a decade and were close to losing their franchise to another city. They were in desperate need of a savior, and he arrived in a wood-paneled station wagon in the dead of winter from New York City. In a single year, Vince Lombardi—the grizzled coach who took no bull—transformed a team of underachievers into winners and resurrected a city known for its passion for sport.

JOHN EISENBERG was an award-winning sports columnist for the Baltimore Sun for two decades and is the author of Ten-Gallon War,That First Season,My Guy Barbaro (cowritten with jockey Edgar Prado), and The Great Match Race. He has written for Smithsonian,Sports Illustrated, and Details, among other publications, and currently contributes columns to BaltimoreRavens.com. He lives in Baltimore, Maryland.