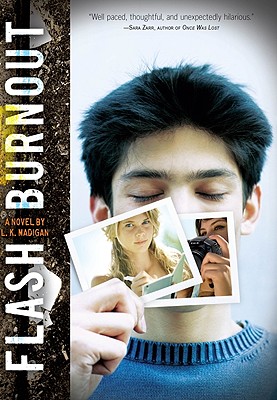 “When he takes a picture of a passed-out street person for his photography class, class-clown Blake expects an 'A.' He doesn't expect that he'll soon be ditching his girlfriend to prowl skid row, or conducting midnight corpse-checks at the morgue to track down his best friend's long-lost mom. This authentic (and surprisingly funny) debut novel is the story of a crash course in what it means to be a boyfriend, and a friend, and a man.”
— Jennifer Laughran, Books Inc., San Francisco, CA
View the List

Fifteen-year-old Blake has a girlfriend and a friend who’s a girl. One of them loves him; the other one needs him.

When he snapped a picture of a street person for his photography homework, Blake never dreamed that the woman in the photo was his friend Marissa’s long-lost meth addicted mom. Blake’s participation in the ensuing drama opens up a world of trouble, both for him and for Marissa. He spends the next few months trying to reconcile the conflicting roles of Boyfriend and Friend. His experiences range from the comic (surviving his dad’s birth control talk) to the tragic (a harrowing after-hours visit to the morgue).

In a tangle of life and death, love and loyalty, Blake will emerge with a more sharply defined snapshot of himself.

"With just enough humor to diffuse the tension and the art and science of photography as a backdrop, this rich romance explores the complexities of friendship and love, and the all-too-human limitations of both. It’s a sobering, compelling, and satisfying read for teens and a promising debut for a new young-adult author."--Booklist, starred review  "An exceptional novel, Flash Burnout is thought-provoking on many levels."--School Library Journal, starred review

L. K. Madigan lives in Portland, Oregon with her husband, son, two big black dogs, hundreds of books, and a couple of vintage cars.
Loading...
or
Not Currently Available for Direct Purchase