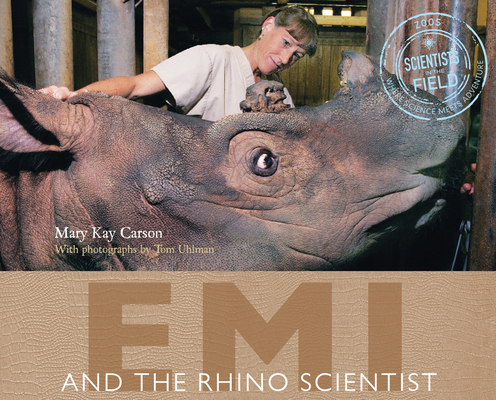 Emi and the Rhino Scientist (Scientists in the Field Series)

Terri Roth trudges through the thick, dark Sumatran jungle. She’s looking for a rhinoceros that’s been seen in the area. It’s a rare Sumatran rhino, the world’s smallest rhino and one of the most endangered mammals on the planet.Suddenly she spots a young female rhino through the tangle of ferns and trees. The stocky animal is covered in reddish hair, and her snout sports two stubby horns. The rhino walks right up to Terri. The scientist slowly reaches out her hand and touches the rhino’s big nose. The wild rhino’s curiosity and friendliness remind Terri of Emi, the female Sumatran rhino that lives at the Cincinnati Zoo where Terri works. Terri is working with Emi to help save Sumatran rhinos from extinction—one calf at a time.

"Carson provides fascinating detail...color photographs featuring Roth at work are upstaged only by those of the rhinos themselves..." The Horn Book, Nov/Dec 2007 Horn Book

The text is ful of important details, and the photographs are unfailingly crisp, bright, and full of variety." SLJ November 2007 School Library Journal

"Pair this with other animal titles...and make sure kids get a chance to view Emi real-time on the zoo's webcam." The Bulletin of the Center for Children's Books

"This latest in the Scientists in the Field series has all the elements of top-notch nonfiction." Booklist 12/1/07 Booklist, ALA, Starred Review