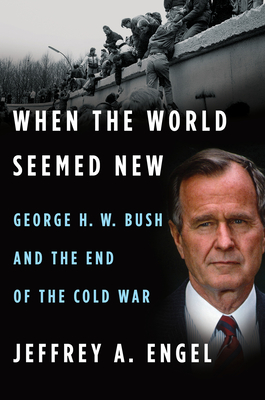 When the World Seemed New (Hardcover)

George H. W. Bush and the End of the Cold War

By Jeffrey A. Engel

Based on unprecedented access to previously classified documents and dozens of interviews with key policymakers, here is the untold story of how George H. W. Bush faced a critical turning point of history—the end of the Cold War.

The end of the Cold War was the greatest shock to international affairs since World War II. In that perilous moment, Saddam Hussein chose to invade Kuwait, China cracked down on its own pro-democracy protesters, and regimes throughout Eastern Europe teetered between democratic change and new authoritarians. Not since FDR in 1945 had a U.S. president faced such opportunities and challenges.

As the presidential historian Jeffrey Engel reveals in this page-turning history, behind closed doors from the Oval Office to the Kremlin, George H. W. Bush rose to the occasion brilliantly. Distrusted by such key allies as Margaret Thatcher and dismissed as too cautious by the press, Bush had the experience and the wisdom to use personal, one-on-one diplomacy with world leaders. Bush knew when it was essential to rally a coalition to push Iraq out of Kuwait. He managed to help unify Germany while strengthening NATO. Based on unprecedented access to previously classified documents and interviews with all of the principals, When the World Seemed New is a riveting, fly-on-the-wall account of a president with his hand on the tiller, guiding the nation through a pivotal time and setting the stage for the twenty-first century.

JEFFREY A. ENGEL is the founding director of the Center for Presidential History at Southern Methodist University. Educated at Cornell, Oxford, the University of Wisconsin-Madison, and Yale University. He has authored or edited ten books on American foreign policy, including The Fall of the Berlin Wall: The Revolutionary Legacy of 1989 and The China Diary of George H. W. Bush: The Making of a Global President. Born above the Mason-Dixon line, he now lives and teaches in Dallas, Texas.


Praise For When the World Seemed New: George H. W. Bush and the End of the Cold War…

"At one of the great turning points in modern history, America and the Free World (the phrase meant more then) were fortunate to be led by a president, George H.W. Bush, who is only now receiving his due. In this epic book, Jeffrey A. Engel explains how Bush presided over the momentous conclusion of the Cold War. With searching scholarship, a gift for the telling human detail, and an appreciation of how the personal and the political interact in often-subtle ways, Engel has written a landmark account of a president, a nation, and a global order at a crossroads. This is a terrific work of history." —Jon Meacham, author of Destiny and Power: The American Odyssey of George Herbert Walker Bush

“Usually, when empires fall, war and chaos follow. Amazingly, when the Soviet Union--with its 20,000 or so nuclear weapons--collapsed, the world became (for a time, anyway) more peaceful and prosperous, thanks in no small part to the wisdom, vision, and restraint of President George H.W. Bush. Jeffrey Engel has written a rich, marvelous narrative history stocked with lessons for our own dangerous times." —Evan Thomas, author of Ike's Bluff and Being Nixon

“The Cold War’s end offered peril and promise, and Jeffrey A. Engel’s revealing and deeply researched new history demonstrates that George H.W. Bush navigated it brilliantly.  Instability loomed.  Yet Bush’s personal diplomacy ensured Germany’s successful unification, the Soviet Union’s peaceful collapse, victory in the Persian Gulf, and preservation of Sino-American relations after the horror of Tiananmen Square.  His reputation as a statesman has rightly grown over time.  Peering into the halls of power on both sides of the Iron Curtain and in the Oval Office in particular, Engel’s gripping account show us why.” —Stephen Hadley, former National Security Advisor

“When the World Seemed New is a fine, often stirring account of these times…an absorbing book.” –Wall Street Journal