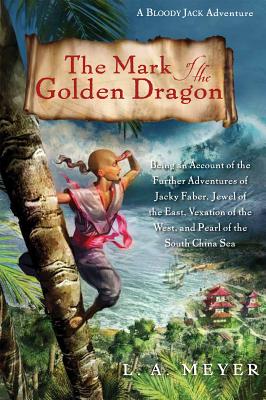 The Mark of the Golden Dragon (Hardcover)

Being an Account of the Further Adventures of Jacky Faber, Jewel of the East, Vexation of the West, and Pearl of the South China Sea (Bloody Jack Adventures #9)

“Jacky Faber is back in the saddle and ready for vengeance in the next installment of the Bloody Jack series. Chock-full of adventure on the high seas, scheming on shore, and revenge against the misled British government that condemned Jacky to life in a penal colony in New South Wales, Meyer's latest does not disappoint in bringing us our favorite heroine's newest globe-trotting misadventures.”
— Rachel Haisley, The King's English, Salt Lake City, UT
View the List

Jacky Faber embarks on another rousing adventure to delight her ever-growing legion of fans. The irrepressible Jacky Faber, condemned for life to the English penal colony in Australia for crimes against the Crown, has once again wriggled out of the grasp of British authorities. Back on her flagship, the Lorelei Lee, she eagerly heads back to England in the company of friends and her beloved Jaimy Fletcher. But when the voyage is waylaid by pirates, storms, and her own impetuous nature, Jacky is cast into a world of danger that extends from the South China Sea to the equally treacherous waters of London politics. With the help of her loyal friends, Jacky meets her enemies head-on in this tale of love, courage, and redemption.

L. A. Meyer (1942–2014) was the acclaimed writer of the Bloody Jack Adventure series, which follows the exploits of an impetuous heroine who has fought her way up from the squalid streets of London to become an adventurer of the highest order. Mr. Meyer was an art teacher, an illustrator, a designer, a naval officer, and a gallery owner. All of those experiences helped him in the writing of his curious tales of the beloved Jacky Faber. Visit www.jackyfaber.com for more information on the author and his books.


Praise For The Mark of the Golden Dragon: Being an Account of the Further Adventures of Jacky Faber, Jewel of the East, Vexation of the West, and Pearl of the South China Sea (Bloody Jack Adventures #9)…

* "This resilient and exuberant heroine deserves a stamp of approval."—Kirkus Reviews, starred review "Delivering the high adventure, good humor, and bits of ballad that the Bloody Jack Adventure series is known for, this historical novel will please avid fans of Jacky."—Booklist
or
Not Currently Available for Direct Purchase
Copyright © 2020 American Booksellers Association