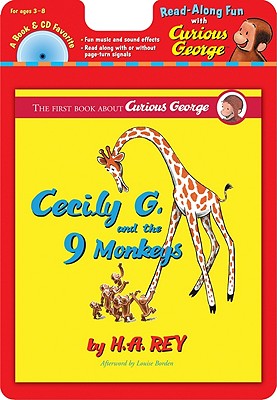 Cecily G. and the Nine Monkeys Book and CD

Cecily G. is a lonely giraffe who finds herself befriended by nine monkeys—including everyone’s favorite curious monkey! Together they share many adventures—from skiing to sailing to the heroic saving of Cecily’s house. This first story featuring Curious George showcases the adventure and humor readers love about the Reys’ stories. This edition of the book includes Louise Borden’s engaging afterword that places Cecily G. in historical context vis-a-vis the development of Curious George and the Reys’ personal immigration journey.

Praise For Curious George: Cecily G. and the Nine Monkeys Book and CD…

"There is originality and a childlike humor in both the amusing antics and engaging pictures." Booklist, ALA

Louise Borden is the highly regarded author of many books, including Good Luck, Mrs. K!, Sleds on Boston Common, Good-bye, Charles Lindbergh and The Little Ships: The Heroic Rescue at Dunkirk in WW II, published by Margaret McElderry Books, and The Journey That Saved Curious George, Across the Blue Pacific, and His Name Was Raoul Wallenberg, published by HMH. She lives with her husband, Pete, in Cincinnati, Ohio, and has three grown children. Her website can be found at www.louiseborden.com.
Loading...
or
Not Currently Available for Direct Purchase