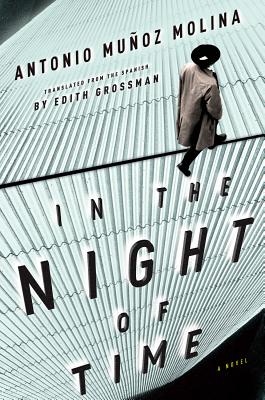 In the Night of Time (Hardcover)

October 1936. Spanish architect Ignacio Abel arrives at Penn Station, the final stop on his journey from war-torn Madrid, where he has left behind his wife and children, abandoning them to uncertainty. Crossing the fragile borders of Europe, he reflects on months of fratricidal conflict in his embattled country, his own transformation from a bricklayer’s son to a respected bourgeois husband and professional, and the all-consuming love affair with an American woman that forever alters his life.

Winner of the 2012 Prix Méditerranée Étranger and hailed as a masterpiece, In the Night of Time is a sweeping, grand novel and an indelible portrait of a shattered society, written by one of Spain’s most important contemporary novelists.

ANTONIO MUÑOZ MOLINA is the author of more than a dozen novels, among them Sepharad, A Manuscript of Ashes, and In Her Absence. He has also been awarded the Jerusalem Prize and the Príncipe de Asturias Prize, among many others. He lives in Madrid and New York City.

EDITH GROSSMAN is the acclaimed translator of, among others, Cervantes, Gabriel García Márquez, and Mario Vargas Llosa. In 2006 she was awarded the PEN/Ralph Manheim Medal for Translation.

Praise For In the Night of Time…

"Spellbinding…What distinguishes In the Night of Time—what makes it eye-openingly new—is its meticulous reconstruction of Spain in 1936, its attention to detail, its fusion of history and imagination, its tension between love’s surrender and war’s stiff resolve. Let me put it this way: Antonio Muñoz Molina’s novel is one of the most eloquent monuments to the Spanish Civil War ever to be raised in fiction." —Marie Arana, Washington Post

"Labyrinthine and spellbinding…one of the most eloquent monuments to the Spanish Civil War ever to be raised in fiction." --The Washington Post, Best Fiction Books of 2014

"Sweeping, magisterial...An astonishingly vivid narrative that unfolds with hypnotic intensity by means of the constant interweaving of time and memory...In the Night of Time is Tolstoyan in its scale, emotional intensity and intellectual honesty." —The Economist

"What is remarkable about the book, despite the emphasis on the private and the shadowy, is how much Muñoz Molina manages to say about the world itself and how hypnotic his narrative becomes as he slows down time...He can have his protagonist contemplate his own past in slow and searching tones; he can have him consider his lover's body with mesmeric grace; he can have him ponder his need to escape with urgency; he can have him consider architecture with originality...Muñoz Molina, in all his fiction, has a sense of the past as a living force, darting, shifting, haunting, impossible to pin down...In In the Night of Time he brings this perception further, allowing the most private inner moments to have greater importance than the war outside, and he approaches character with even greater tenderness, allowing for every type of weakness." —Colm Toibin, New York Review of Books

"An epic…Molina’s cogent examination of war on a scale both large and small reaffirms his place as a giant of Europe’s literary scene, well-worth being discovered by American readers." —The Daily Beast

"A story of love, violence, and politics…[In the Night of Time] echoes Molina’s earlier works, including the much-praised A Manuscript of Ashes." —The New Yorker

"Epic…In the Night of Time gives its subject the space it deserves and renders it vibrantly with intoxicating prose." —Entertainment Weekly

"A sweeping, mesmerizing tale that weaves seamlessly between Spain and America, present and past, personal and political." —Bustle.com

"Superb…A simple love story at one level, a broad portrait of a nation in flames at another, and a masterwork through and through." —Kirkus (starred review)

"A War and Peace for the Spanish Civil War, this classically sweeping novel from Molina (A Manuscript of Ashes) follows a large cast of characters, intermingling real and fictional figures, through times of both peaceful routine and grotesque violence." —Publishers Weekly

"A large rough-cut gem of a story that lingers in one’s mind. [Molina] appears to be finally getting the international attention he deserves." —Booklist (starred review)

“Antonio Munoz Molina's In The Night of Time is a sweeping love story enveloped by the horrors of the Spanish Civil War…In this monumental book, Molina has described with brutal honesty the atrocities committed on both sides of the war.” – Charleston Post and Courier