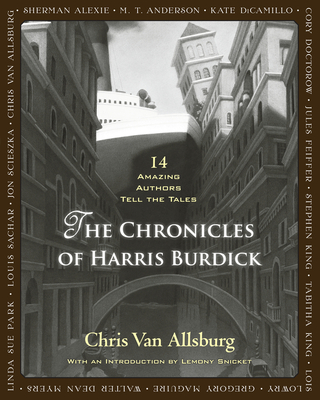 The Chronicles Of Harris Burdick

An inspired collection of short stories by an all-star cast of best-selling storytellers based on the thought-provoking illustrations in Chris Van Allsburg’s The Mysteries of Harris Burdick.

For more than twenty-five years, the illustrations in the extraordinary Mysteries of Harris Burdick by Chris Van Allsburg have intrigued and entertained readers of all ages. Thousands of children have been inspired to weave their own stories to go with these enigmatic pictures. Now we’ve asked some of our very best storytellers to spin the tales. Enter The Chronicles of Harris Burdick to gather this incredible compendium of stories: mysterious, funny, creepy, poignant, these are tales you won’t soon forget.

Van Allsburg's Harris Burdick illustrations have evoked such wonderment and imagination since Harris Burdick's original publication in 1984; many have speculated or have woven their own stories to go with his images. More than ever, the illustrations send off their eerie call for text and continue to compel and pick at the reader's brain for a backstory—a threaded tale behind the image. In this book, we've collected some of the best storytellers to spin them.


Praise For The Chronicles Of Harris Burdick: Fourteen Amazing Authors Tell the Tales / With an Introduction by Lemony Snicket…

“Engaging, with strokes of brilliance”—Kirkus “This star-studded exercise in creative writing tests the wits of favorite authors and shows readers how even the big shots hone their craft.”—Publishers Weekly, starred review “The stories embrace a range of styles and subjects, but, like their enigmatic and mysterious inspirations, each touches on the strange, the odd, and the fantastic.”—The Horn Book Magazine “While the stories are distinct—by turns funny, sinister, and touching—they have much in common, sharing an arch tone, a curious metaphysicality, and some familiar folk-tale tropes, and the authors’ commitment to the original conceit gives the volume additional cohesion.”—Booklist