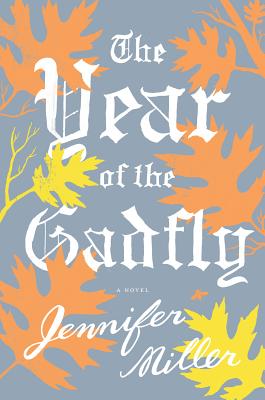 The Year of the Gadfly

“Do you know what it took for Socrates’ enemies to make him stop pursuing the truth?”
“Hemlock.”

Storied, fiercely competitive Mariana Academy was founded with a serious honor code; its reputation has been unsullied for decades. Now a long-dormant secret society, Prisom's Party, threatens its placid halls with vigilante justice, exposing students and teachers alike for even the most minor infraction.

Iris Dupont, a budding journalist whose only confidant is the chain-smoking specter of Edward R. Murrow, feels sure she can break into the ranks of The Devil’s Advocate, the Party’s underground newspaper, and there uncover the source of its blackmail schemes and vilifying rumors. Some involve the school’s new science teacher, who also seems to be investigating the Party. Others point to an albino student who left school abruptly ten years before, never to return. And everything connects to a rare book called Marvelous Species. But the truth comes with its own dangers, and Iris is torn between her allegiances, her reporter's instinct, and her own troubled past.

The Year of the Gadfly is an exhilarating journey of double-crosses, deeply buried secrets, and the lifelong reverberations of losing someone you love. Following in the tradition of classic school novels such as A Separate Peace, Prep, and The Secret History, it reminds us how these years haunt our lives forever.


Praise For The Year of the Gadfly…

"Engages and provokes."
—The Boston Globe

"There is a relentless authenticity in her prose...Miller effectively places here characters in a vice and squeezes the truth out of them."
—The Atlantic.com

"A smoldering mystery set in a New England prep school... The author skillfully ratchets up the tension as Iris (and the reader) finds it harder and harder to tell who the good guys are... A gripping thrill ride that’s also a thoughtful coming-of-age story."
-Kirkus Reviews

"In this engrossing novel, a would-be journalist unearths scandalous secrets at her prep school with the help of a famous reporter’s ghost."
-O Magazine"A coming of age page-turner."
—Library Journal"Hysterical and moving, The Year of the Gadfly fuses Special Topics in Calamity Physics with Portnoy's Complaint for girls. This book is an imaginative delight."
—Gary Shteyngart, author of Super Sad True Love Story"A dark, whirling, and compelling read. The Year of the Gadfly is a hilarious and heartbreaking story about friendship, acceptance, and trust — the way our search for them shapes our youth and how that search can haunt us forever."
—Jennifer Close, author of Girls in White Dresses"This novel has so much going for it: the feisty, heartbroken heroine, the ghost of Edward R. Murrow, and a fascinating love story between an albino girl and a gifted young scientist. In a brilliant portrayal of the dark underbelly of adolescence, Miller explores a time when both our identity and our future are at stake, and shows how rare it is to leave that landscape unscathed."
—Ann Napolitano, author of Within Arm's Reach and A Good Hard Look "It's hard to resist any novel whose young journalist heroine hallucinates that she's in conversation with Edward R. Murrow. But Jennifer Miller has also written a book with the feel of real life—part science experiment, part mystery story, part a coming-of-age narrative sorting out the truth about one's friends and enemies."
—David Ignatius, author of Bloodmoney"Jennifer Miller is a writer of exceptional promise, with instincts that are equally astute for insight into character, innovative structure, memorable phrasing, and startling plot turns that compel the reader to read on. In The Year of the Gadfly, her literary gifts are on virtuoso display; readers will be drawn deeply into this narrative and never want to leave it!"
—Carol Goodman, author of The Lake of the Dead Languages and The Seduction of Water

JENNIFER MILLER, the author of Inheriting the Holy Land: An American’s Search for Hope in the Middle East, holds a BA from Brown University, an MS in journalism from Columbia, and an MFA in fiction writing from Columbia. Her work has been published inthe New York Times, Marie Claire, Men’s Health, the Christian Science Monitor, Salon.com, and others.

In the beginning of the novel the author uses phrases like, “The seat belt held me like a straitjacket” (p. 5), and “The place screamed asylum more than school” (p. 8). She also describes the houses in Nye as “in various stages of decay and abandonment” (p. 5). What kind of mood did these images create for the opening scenes? How did this influence your reading experience?

In addition to speaking to the specter of Murrow, Iris spends time imagining the lives of Lily, the schoolgirl whose room she uses, and her deceased friend, Dalia. What do you think this focus tells us about her worldview? What does it tell you about Iris as a character and her development over the course of the novel?

Jonah Kaplan, the biology teacher, wants to teach students to be “extremophiles.” What inspiration does Iris find in this teacher? What does it mean to be an extremophile? How are Iris and some of the other characters extremophiles—and how are they not? And what is the significance of the book Iris discovers, Marvelous Species? Do extremophiles tell us anything particularly interesting about the setting of the novel?

Hazel, the Nye Historical Society’s curator, talks with Iris about Socrates and his role as a gadfly (p. 90). Iris considers herself a gadfly. What does she mean? What were Hazel’s motivations in bringing it up? Discuss the significance of the title in light of their conversation.

When Lily and Justin go on their first date, they begin to watch and discuss the film Dead Poets Society (p. 121). What were Justin’s premonitions about the movie? Compare and contrast the secret society in the movie with the one in the book.

Iris is kidnapped by four students in pig masks. One tells her, “Just because something looks sinister doesn’t mean it is” (p. 137). How does Iris relate this to Kaplan’s theories and to the Marvelous Species manuscript on microorganisms? How does she relate this concept to life itself?

Lily finds kinship in the character of Hester Prynne in Hawthorne’s The Scarlett Letter. Why do you think she is able to relate to this character? Are there any other characters in Gadfly you can imagine relating to the character of Prynne?

Iris recalls Mr. Kaplan saying, “With all the dead skin cells and falling leaves, the world is dying as much as it’s living” (p. 145). Do you think this idea fits with Iris’s world view? Is there a positive and negative way to view this kind of process?

On page 201, Jonah Kaplan says, “We all desired what we could not have. Justin, Lily, and myself. Even Hazel.” How does each character desire what could not be attained? Does that apply to Iris as well? Why or why not? Is unrequited and unquenched desire something that seems especially true in adolescence?

What role does ambition play in this novel? Which characters are ambitious and in what ways? Is there a price to pay for achieving one’s ambition, and is that price equal regardless of who is paying it?

Look at the bullying that went on between various groups and students over the different time periods depicted in the book. How is it representative of our current climate and, perhaps, the bullying you witnessed when you were younger? What tactics did Prisom’s Party employ versus the treatment the art girls leveled at Lily, or Hazel’s behavior toward Lily? What types of bullying have you witnessed in your own life and what have been the repercussions?

At one point the imaginary Ed Murrow says to Iris, “There is no Edward R. Murrow. There’s only the myth of him” (p. 285). What did he mean by this? How does this change Iris? Why do you think Iris has Edward Murrow as an imaginary friend and role model? What might have prompted the author to choose him for this role?

There were a number of twists, turns, and surprises in the climax of this book. Was there one that shocked you most? Discuss which one it was, and why it had a particularly strong effect on you.

At the end of the novel, Jonah Kaplan muses, “the idea of prep school flouts evolution itself” (p. 362). What does he mean by this? Is he referring to more than prep school?

The author uses a number of narrative devices to relay the story: multiple points of view, switching from first to third person, and moving back and forth from one decade to another. What does the author accomplish by switching points of view throughout the novel? How are the three narrators connected through their experiences? Do you think the novel’s themes or messages benefit from these variations? Did you have a favorite point of view or era, or was each equally compelling?

“Most good things in life come prepackaged with nostalgia; otherwise nobody would appreciate anything” (p. 275). Why do you think Jonah feels this way? Do you agree or disagree? In what ways does nostalgia pervade this novel? How do we overcome our pasts, or, why and how do the characters in this book struggle to shed their pasts? Do they succeed? Can anyone? Would you want to succeed at such a goal?