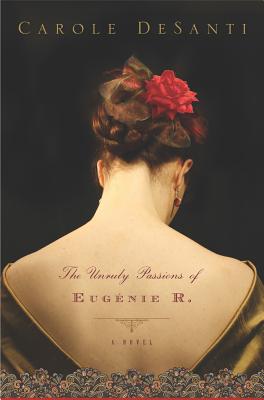 The Unruly Passions of Eugénie R.

“As fiercely depicted as the paintings of Toulouse-Lautrec.” — Stephanie Cowell, author of Claude and Camille

Love and war converge in this lush, epic story of a young woman’s coming of age during and after France’s Second Empire (1860–1871), an era that was absinthe-soaked, fueled by railway money and prostitution, and transformed by cataclysmic social upheaval.

Eugénie R., born in foie gras country, follows the man she loves to Paris but soon finds herself marooned. An outcast, she charts the treacherous waters of sexual commerce on a journey through artists’ ateliers and pawnshops, zinc bars and luxurious bordellos. Giving birth to a daughter she is forced to abandon, Eugénie spends the next ten years fighting to get her back, falling in love along the way with an artist, a woman, and a revolutionary. Then, as the gates of the city close on the eve of the Siege of Paris, Eugénie comes face to face with her past. Drawn into a net of desire and need, promises and lies, she must make a choice and find her way to a life that she can call her own.

"Eugénie R.’s story drops us into the dark velvety centers of sex, sin, and political intrigue, and takes us along on her own instinctive journey to modern womanhood." — Lynn Hunt, Eugen Weber Professor of Modern European History, UCLA

"This astonishing debut is a panoramic story of war and peace, love and betrayal, innocence and hard-won wisdom." — Lauren Belfer, author of A Fierce Radiance


Praise For The Unruly Passions of Eugénie R.…

"I lost myself whole-heartedly in [Eugénie's] story, and would have followed her down any narrow alley, into any candlelit room, just to know what happened, to stay back there and to delay coming home." —Sarah Blake, author of The Postmistress

"A sweeping, fascinating epic full of drama and beauty."—Publishers Weekly

"The Unruly Passions of Eugénie R. is as much a personal meditation on women’s emotional and professional tradeoffs as it is a sweeping saga of the decadent Paris that spawned Madame Bovary. … Don’t read this fiercely intelligent novel if you simply want a good love story dressed up in period clothes. Read it for the complex sexual politics, lush language, and mirror onto our own excessive, heedless times."—Sheri Holman, author of The Dress Lodger

"The Unruly Passions of Eugénie R. is an arresting tale of what it meant to survive as a woman in 19th-century France. With spare, powerful prose Carole DeSanti's debut novel paints an unflinching portrait of love and loss against a landscape of Parisian decadence." — Deborah Harkness, author of A Discovery of Witches

"Epic times make for epic books. The Unruly Passions of Eugénie R. is both sweeping in scope and painstaking in detail. Eugénie R.'s story, from naive goosegirl to resilient survivor, makes for wonderful, suspenseful reading, but tumultuous Paris is equally compelling, laid out here by DeSanti in all her grisly or gorgeous glory." — Karen Joy Fowler, author of The Jane Austen Book Club

"Against a carefully recreated landscape of France and the City of Lights during the 1860s, with the Prussian army heading for Paris, DeSanti brings a 21st-century sensitivity for the plight and passions of women in her rendering of Eugénie and the women and men she comes to travel (and drink) among." —Mireille Guiliano, internationally best-selling author of French Women Don’t Get Fat

"Reading The Unruly Passions of Eugénie R. is like entering a lush dream filled with beauty and brutality. This astonishing debut is a panoramic story of war and peace, love and betrayal, innocence and hard-won wisdom, told through the eyes of a compelling woman who kept me at her side through it all." —Lauren Belfer, author of A Fierce Radiance

"So richly and sensuously drawn one can almost feel it . . . Perhaps if [Eugénie's] contemporary, Emma Bovary, had possessed the ingenuity, wit, and tenacity of Eugénie R., Madame B. wouldn’t have had to take that arsenic." — Valerie Martin, author of The Confessions of Edward Day

"Lord! This is a great piece of work. How beautifully this is written. How rare that is to discover on the page." — Dorothy Allison, author of Bastard Out Of Carolina

Carole DeSanti is a longtime book editor and champion of new voices in fiction. Her work has appeared in The New York Times and the Women's Review of Books. Visit www.caroledesanti.net.

“I will be your protector,” Stephan tells Eugénie in chapter one, as she prepares to leave for Paris. Why is she vulnerable to betrayal, again and again? As she matures, how does she reconcile her need for a protector with her need for independence?

What is the effect of Eugénie’s storytelling style, and her confession that she had been pressured to write a memoir (though she doesn’t like to write)? What is ironic and amusing about the book’s sensational title, which would have caught the attention of censors in nineteenth-century France? How did the epigraphs from courtesan Céleste Mogador enhance the book’s realism?

Midway through the prologue, Eugénie asks, “How does a woman learn to doubt herself? When does it happen, and why?” How would you respond to these questions? Is an American woman living in the twenty-first century less likely to doubt herself?

Discuss the lovers who truly capture Eugénie’s heart: Stephan, Chasseloup, Jolie, and Henri. What do they each offer her? How do they reflect various stages of her life?

Who are the power brokers in Eugénie’s world? How does she use her power once she is able to employ servants and recruit young girls to follow in her footsteps? Does the Napoleonic Code, meant to support established social values, benefit Eugénie?

How did you react to Giulia’s test of wills on the bitterly cold night when she refused warmth? In this novel, what separates those who survive from those who perish? How would you have fared if you had been in Eugénie’s circumstances?

Discuss the role of artists during the Second Empire, when new wealth led to new audiences for painters like Chasseloup. How does his vision as an artist compare to that of Eugénie’s mother?

How did you react to Beausoleil, the wealthy southerner who gives Eugénie a reprieve from poverty? How is he able to reject the idea of freedom for his slaves while he, as a gay man, experiences limited freedom himself?

Jolie and Odette form a circle of friendship that sustains Eugénie and other women. What enables them to be generous with each other, when resources are hard to come by? How does ginger cat Clio contribute to this circle of love?

Explore the many appetites described in this novel: for food, sex, beautiful clothing and jewels, opium and wormwood. What were your favorite scenes in which the author brings these hungers (and their fulfillment) to life?

What does Eugénie discover about herself when she travels to Auch? How are her memories of Tillac, her family’s village, transformed by her visit? Have you ever experienced a similar homecoming?

How does Eugénie’s identification with motherhood contour and influence her life? How does her definition of motherhood seem to differ from that of the society around her?

What do you predict for young Berthe’s future? What will she think of her mother, and of womanhood in general?

How does Eugénie’s registration as an inscrit hold her “unruly passions” in check? On balance, does this situation help or harm her, or both? What are your thoughts on societies that regulate and tolerate prostitution today?

What did Eugénie help you discover about Europe’s history? Do the complaints raised by the Paris Commune have any resonance today? What can fiction teach us about history that a history book cannot?