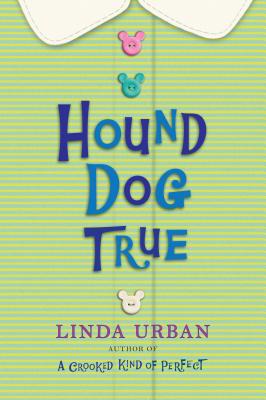 A story about small acts of courage from the author of A Crooked Kind of Perfect.

Do not let a mop sit overnight in water. Fix things before they get too big for fixing. Custodial wisdom: Mattie Breen writes it all down. She has just one week to convince Uncle Potluck to take her on as his custodial apprentice at Mitchell P. Anderson Elementary School. One week until school starts and she has to be the new girl again. But if she can be Uncle Potluck’s apprentice, she’ll have important work to do during lunch and recess. Work that will keep her safely away from the other fifth graders. But when her custodial wisdom goes all wrong, Mattie’s plan comes crashing down. And only then does she begin to see how one small, brave act can lead to a friend who is hound dog true.

Linda Urban's debut novel, A Crooked Kind of Perfect, was selected for many best books lists and was nominated for twenty state awards. She is also the author of Hound Dog True, The Center of Everything, Milo Speck, Accidental Agent, and the chapter book Weekends with Max and His Dad, which received two starred reviews. A former bookseller, she lives in Vermont. Visit Linda online at lindaurbanbooks.com and on Twitter at @lindaurbanbooks.

* "Urban (A Crooked Kind of Perfect) traces a highly self-conscious child's cautious emergence from her shell in this tender novel about new beginnings and "small brave" acts... Urban's understated, borderline naïf narrative gives voice to Mattie's many uncertainties ("Always Mattie has been shy. Always school had made her feel skittish and small") while expressing the quiet yet significant moments in her day-to-day life. Mattie's growing trust of others and her attempts to be "bold and friendly" lead to gratifying rewards for Mattie and poignant moments for readers."—Publishers Weekly, starred review

"Internal drama, compelling characters, and Mattie’s strong voice propel the story of learning to do "a small brave thing."—Booklist

* "There are many books that offer adventure and twists and unusual story lines. Most of them do not offer young readers such fine writing and real characters. That is hook enough."—School Library Journal, starred review