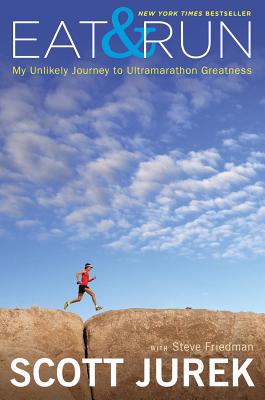 My Unlikely Journey to Ultramarathon Greatness

For nearly two decades, Scott Jurek has been a dominant force—and darling—in the grueling and growing sport of ultrarunning. In 1999, as a complete unknown, he took the lead of the Western States Endurance Run, a 100-mile traverse over the old Gold Rush trails of the California Sierra Nevada. He won that race seven years in a row, setting a course record along the way. Twice he won the Badwater Ultramarathon, a 135-mile “jaunt” through Death Valley. Recently he set an American record of 165.7 miles in 24 hours—6 1/2 marathons in one day. And he was one of the elite runners who traveled to Mexico to run with the Tarahumara Indians, as profiled in the bestseller Born to Run. His accomplishments are nothing short of extraordinary, but that he has achieved all of this on a plant-based diet makes his story all the more so.

In Eat and Run, Scott Jurek opens up about his life and career—as an elite athlete and a vegan—and inspires runners at every level. From his Midwestern childhood hunting, fishing, and cooking for his meat-and-potatoes family, to his early beginnings in running (he hated it), to his slow transition to ultrarunning and veganism, to his world-spanning, record-breaking races, Scott’s story shows the power of an iron will and blows apart all the stereotypes of what athletes should eat to fuel optimal performance. Chock-full of incredible, on-the-brink stories of endurance and competition, fascinating science, and accessible practical advice—including his own favorite plant-based recipes—Eat and Run will motivate everyone to “go the distance,” whether that means getting out for that first run, expanding your food horizons, or simply exploring the limits of your own potential.

Praise For Eat and Run: My Unlikely Journey to Ultramarathon Greatness…

"The surprise here isn't that Scott Jurek knows a lot about nutrition—I especially love his "Holy Moly Guacamole" recipe. Or that he ran prodigious mileage to prepare for his many ultramarathon victories. More impressively, we discover that Jurek studied many of the great philosophers, and used their lessons to focus his running. In pursuing the mental side of endurance, Jurek uncovers the most important secrets any runner can learn." —Amby Burfoot, winner of the 1968 Boston Marathon and author of The Runner’s Guide to the Meaning of Life

"What a triumph—both Scott Jurek's life and this one-of-a-kind book. I've seen Scott in action as he defies unimaginable challenges, and thanks to this breathtakingly personal account, I finally understand how he does it. He rebuilt himself literally from the inside out, and the result is a man—and a story—unlike any other." —Christopher McDougall, best-selling author of Born to Run"This is the inspiring story of an inspired man. Scott Jurek's phenomenal success as an ultramarathoner demonstrates that meat and other animal foods are not necessary for optimum health, strength, and endurance." —Andrew Weil, M.D. author of Spontaneous Happiness and 8 Weeks to Optimum Health

SCOTT JUREK is a world-renowned ultramarathon champion who trains and races on a vegan diet. He has prominently appeared in two New York Times bestsellers, Born to Run and The 4-Hour Body, and has been featured on CNN and in the New York Times, USA Today, The Wall Street Journal, and numerous other media. Known and admired for his earth-conscious lifestyle, Scott is also a highly sought after motivational speaker, physical therapist, coach, and chef. He has delivered talks to numerous organizations, including Microsoft, Starbucks, and the esteemed Entertainment Gathering. He lives in Boulder.

STEVE FRIEDMAN is the author of Lost on Treasure Island, Driving Lessons, and The Agony of Victory and co-author of the New York Times bestseller Loose Balls. His work has appeared numerous times in The Best American Sports Writing. His website is stevefriedman.net.
Loading...
or
Not Currently Available for Direct Purchase