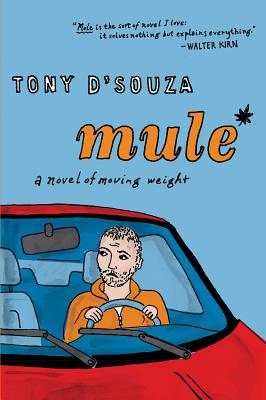 A Novel of Moving Weight

“Thanks to its wicked style and pacing, Mule lets me forget I’m reading serious literature while I follow its terrifying story into the land of the all-American damned.” — Walter Kirn, author of Up in the Air

“Mule is swift, taut, and relentless, both a rip-roaring drug tale and a fascinating portrait of a decent human being whose morals slowly disintegrate under unbearable financial strain.” — Lauren Groff, author of The Monsters of Templeton

James and Kate are golden children of the late twentieth century, flush with opportunity. But an economic downturn and an unexpected pregnancy send them searching for a way to make do. A friend in California’s Siskiyou County grows prime-grade marijuana; if James transports just one load from Cali to Florida, he’ll pull down enough cash to survive for months. And so begins the life of a mule.
A page-turning, Zeitgeist-capturing novel that plunges us into the criminal underworld with little chance to take a breath, Mule is about young people trying to make do in a moment when the American Dream they never had to believe in — because it was handed to them, fully wrapped and ready to go at the takeout window — suddenly vanishes from the menu.

“With adrenaline-infused sentences and a seat-gripping story line, Mule is a novel that illuminates contemporary American desperation, both its dangerous precipices and its thrilling, overwhelming freedom.” — Dean Bakopoulos, author of My American Unhappiness


Praise For Mule: A Novel of Moving Weight…

"An acutely detailed page-turner..."
—Entertainment Weekly"[D'Souza's] authorial voice is sharp and crisp, eschewing flowery prose for a hard-hitting narrative style that perfectly suits the page-turning, drugfueled tale. Fans of Toby Young and Max Barry and those who follow D’Souza’s magazine work will greatly enjoy the timely, witty, fast-paced Mule."
—Booklist"A smart and bracing ground-level exploration of the drug trade."
—Kirkus"Mule is the sort of novel I love: it solves nothing but explains everything. It also, thanks to its wicked style and pacing, lets me forget I’m reading serious literature while I follow its terrifying story into the land of the all-American damned."
—Walter Kirn, author of Up in the Air "Mule is swift, taut, and relentless, both a rip-roaring drug tale and a fascinating portrait of a decent human being whose morals slowly disintegrate under unbearable financial strain. Tony D'Souza proves, yet again, that he is an immensely clever storyteller with plenty of talent to spare."
—Lauren Groff, author of The Monsters of Templeton"With adrenaline-infused sentences and a seat-gripping storyline, Tony D’Souza has written one of the first great novels to emerge from our perplexing, endless recession. A heartfelt tale of one family’s freefall, Mule is a novel that illuminates contemporary American desperation, both its dangerous precipices and its thrilling, overwhelming freedom."
—Dean Bakopoulos, author of My American Unhappiness

Tony D’Souza is the author of three novels, including the award-winning Whiteman. He has contributed to The New Yorker, Playboy, Esquire, Outside, Salon, Granta, McSweeney’s, O. Henry Prize Stories, Best American Fantasy, and elsewhere. A recipient of the Sue Kaufman Prize, Florida Gold and Silver Medals for fiction, and fellowships from the Guggenheim and the NEA, Tony was nominated for a National Magazine Award for coverage of Nicaragua’s Eric Volz murder trial and spent three years in Africa with the Peace Corps.

“‘So I’ve got my dreams,’ Darren said, ‘and unlike you right now, I also have the means to pursue them’” (p. 24). What are James’ dreams? What is he working toward? How does it compare to your definition of the “American dream”?

What do the mountains of northern California and the cabin where James and Kate briefly lived come to represent to James? What does the American West represent in American literature at large and where do you think Mule falls in that canon?

What characterizes a mule? Where does the name come from and what connotations does it have? How does the author use the chapter titles to play off of the title? What did you learn about this particular aspect of drug trafficking that surprised you or fascinated you most?

“I thought about the evening, how excited they’d been. I’d had no idea about that part of it. Hadn’t that made me feel good, like I hadn’t in a while? Hadn’t that been why I’d done it? The roll of money was thick in my pocket” (p. 35). Discuss the extremes James experiences muling. Which aspects give him the most pleasure, and which the most pain? What are all the reasons why James does what he does?

What role does luck play in the novel, looking specifically at JoJo bear and the chance meeting between James and Eric?

Throughout the book James continually asks himself a lot of questions, about why he’s doing what he does and the moral implications of it. What does this say about James’ character? How does it affect your response to him? What are the many moral dilemmas James faces and how does he justify them?

“Drive fast and swerve a lot” becomes a sort of motto for James and the people he works with. What does it mean?

What does the money mean to the different characters in the book? To Kate? To James? To Arlen or Eric? To James’s mother? What will it mean for James and Kate’s own children? Do you think their attitudes change over the course of the story? Are their attitudes particularly American or of their time? How does money relate to success in our culture and what other examples of books and films can you think of that deal with these issues?

“If my wife really loved me, why would she ever let me take the risks I did?” (p. 174). Do Kate and James love each other? Look at the development of Kate and James’ relationship: Which issues do they disagree on? How do they change individually over the course of the novel, and together?

Discuss how James’ ability to handle his emotions leads to his success and examine how when he gives in to his anger it (usually?) leads to trouble. What roles do pride and revenge play in this book? Consider how as a society we stereotypically assign certain emotions to different genders and how this plays out in the novel. Why does James feel the pressure to provide for his family? (Does Kate?) Is this what allows us to feel sympathetic to James, even though he’s a criminal? How else does the author succeed in making us sympathetic to James?

“You’ve always been exactly who you are. Even before you got born in my house,” (p. 243) Eric says to James. In what sense did Eric “create” James? And how did James change, or not change, over the course of the novel?

“But wasn’t it also the worst thing I’d ever done? Far, far beyond anything else?” (p. 245) James asks of his infidelity to his wife. Why does he think this one action is the worst of all? How are his other choices justified? What do you think his worst action was?

Law enforcement is often referred to as “the bad guys” in the novel. Who do you think are the real bad guys? At the end, James sees a similarity between the police and the members of his own line of work: “Their work was the same to them as ours was to us: Exciting. Deliberate. Methodical. Dangerous” (p. 249-250). What implications does this have? What are the differences between the (work of the?) two groups?

Look at other cultural references with similar subjects as those covered in Mule, such as the television shows Weeds and Breaking Bad. What is it about our current economic situation that has us deliberating such complex moral issues? How does Mule compare with what these other cultural vehicles are exploring? How far would you go to protect your family?

Look at Mule’s place in literature, as well. Do books from the Great Depression, like The Grapes of Wrath, Let Us Now Praise Famous Men, and Native Son, resemble in any way our current response to the economic downturn? Could you place it alongside titles that examine our response to the most recent recession, like The Privileges, Union Atlantic, and Dear Money?

Where does Mule fit in with other “drug lit” books like Fear and Loathing in Las Vegas, Jesus’ Son, Less Than Zero or Bright Lights, Big City?

What kind of book is Mule—a classic social novel, thriller, picaresque, cautionary tale, or something else?