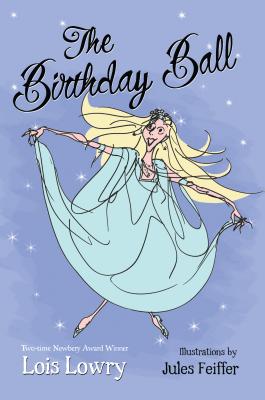 A wry, dry, laugh-out-loud princess tale by the hilarious Lois Lowry, with illustrations by Pulitzer Prize–winning cartoonist Jules Feiffer.Princess Patricia Priscilla is bored with her royal life and the excitement surrounding her sixteenth birthday ball. Doomed to endure courtship by three grotesquely unappealing noblemen, she adopts a peasant disguise and escapes her fate—for a week.In this tale of mistaken identity, creamed pigeons, and young love, the two-time Newbery medalist Lois Lowry compares princesses to peasants and finds them to be exactly the same in all the important ways.

Jules Feiffer's artistic sensibility permeates a wide range of creative work, from his Pulitzer-winning comic strip in the Village Voice, to his Obie Award-winning play Little Murders, to his Oscar-winning anti-military short subject animation, Munro, to his beloved illustrations for The Phantom Tollbooth. Feiffer’s cartoons have appeared in The New Yorker, Esquire, Playboy, and The Nation, and he was commissioned by The New York Times to create its first op-ed page comic strip which ran monthly until 2000, when Feiffer decided to start off the new millennium by giving up cartooning. Taking inspiration from his three daughters spanning three generations, he has reinvented himself as a children’s book author. His first book, The Man in the Ceiling, was selected by Publisher’s Weekly and the New York Public Library as one of the year’s best children’s books.

A former instructor at the Yale School of Drama and Northwestern University, Feiffer is now an adjunct professor at Southampton College, a member of the Dramatists Guild Council and has been elected to the American Academy of Arts and Letters. This is his first book with Houghton Mifflin.


Praise For The Birthday Ball…

"Lowry, who has often turned to new genres and made them her own, now freely adopts certain conventions of the romantic fairy tale to create a fresh story buoyed by wry wit and occasional schoolyard humor. The many idiosyncratic characters are drawn with swift, sure strokes in both the writing and in Feiffer's inimitable ink drawings, notable for their economy and assurance of line as well as their pitch-perfect expression of personality, attitude, and emotion. An original fairy tale with a decidedly comical twist."  —Booklist, starred review

"Lowry uses her knack for cleverly turning familiar stories on their heads (last seen in The Willoughbys) in this tale about a princess who's utterly bored with privileged palace life...Throughout, Feiffer's wiry ink illustrations paint the characters in offhand caricatures, adding to the merriment. Employing elements from the "Prince and the Pauper" as well as ample doses of humor and slapstick, Lowry sets the stage for a rowdy denouement."  —Publishers Weekly

"This is a captivating but gentle fairy tale with memorable characters and wonderfully swirly, evocative, energetic character sketches by the fabulous Feiffer."  —School Library Journal

"In her clever fairy-tale reconstruction, Lowry transforms the traditional princess into a refreshingly egalitarian heroine with a mind of her own. The hilarious, original and truly loathsome suitors are aptly memorialized in Feiffer’s spritely black-and-white caricature illustrations. Guaranteed to generate giggles and guffaws."  —Kirkus Reviews

"Feiffer's frenetic lines and distinctive caricatures maintain the offbeat tone while adding a charming quirkiness in their own right. Youngsters who like thier fair share of mischief will get a kick out of this fractured fairy tale either on their own or as a readaloud."  —The Bulletin

"Happiness radiates out from the Birthday Ball, zings down to the village and up again. A great story when read aloud."  —Chicago Tribune