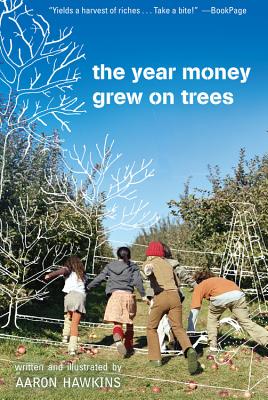 The Year Money Grew on Trees

An unusual and captivating novel brimming with a sense of can-do and earned independence.With frostbitten fingers, sleepless nights, and sore muscles, fourteen-year-old Jackson Jones and his posse of cousins discover the lost art of winging it when they take over an orchard of three hundred wild apple trees. They know nothing about pruning or irrigation or pest control, but if they are to avoid losing the $8,000 they owe on an unfair contract with their neighbor, Mrs. Nelson, they just have to figure it out.

Praise For The Year Money Grew on Trees…

"Set in New Mexico in the early 1980s, Hawkins's children's book debut is rich with details that feel drawn from memory (an engineering professor who worked on his family's orchard as a child, Hawkins also contributes schematic line drawings), and Jackson's narration sparkles. His hard work, setbacks, and motivations make this a highly relatable adventure in entrepreneurship."--Publishers Weekly

Aaron Hawkins tended his grandmother's orchard as a child. About his first novel, The Year Money Grew on Trees, he writes:  "I hoped to create a story that contained some of the things I learned: appreciation for nature and growing something, the self esteem that comes from hard work, and the love for family and friends that comes from struggling together." He still owns the orchard to this day.
or support indie stores by buying on