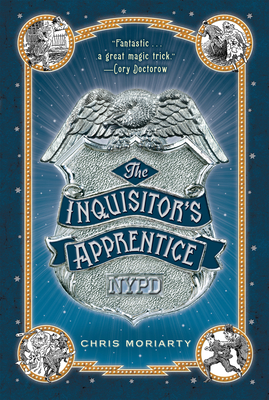 The day Sacha found out he could see witches was the worst day of his life . . .

Being an Inquisitor is no job for a nice Jewish boy. But when the police learn that Sacha Kessler can see witches, he’s apprenticed to the department’s star Inquisitor, Maximillian Wolf. Their mission is to stop magical crime. And New York at the beginning of the twentieth century is a magical melting pot where each ethnic group has its own brand of homegrown witchcraft, and magical gangs rule the streets from Hell’s Kitchen to Chinatown.

Soon Sacha has teamed up with fellow apprentice Lily Astral, daughter of one of the city’s richest Wall Street Wizards—and a spoiled snob, if you ask Sacha. Their first case is to find out who’s trying to kill Thomas Edison.

Edison has invented a mechanical witch detector that could unleash the worst witch-hunt in American history. Every magician in town has a motive to kill him. But as the investigation unfolds, all the clues lead back to the Lower East Side. And Sacha soon realizes that his own family could be accused of murder!

Chris Moriarty grew up in New York surrounded by a loud and zany family much like Sacha Kessler’s. Chris has published several science fiction novels, including Spin Control, which won the Philip K. Dick Award. She wrote The Inquisitor’s Apprentice for her children so that they would be able to read a fantasy that celebrates their New York Jewish heritage. Chris lives in upstate New York.

Mark Edward Geyer is best known as the illustrator of two Stephen King novels: Rose Madder and The Green Mile. Mark has worked in a variety of illustration genres, including corporate advertising, editorial, and architectural. He comes from a long line of artists. Visit his website at www.markedwardgeyer.com.


Praise For The Inquisitor's Apprentice…

"Moriarty’s novel is chock-full of period detail (both in the author’s confident prose and Geyer’s occasional pen-and-ink illustrations), feisty character dynamics, and a solid sense of humor. It’s a fascinating example of alternate history that leaves the door open for future mysteries."—Publishers Weekly, starred review

"A wonderfully inventive and fascinating story of the clash of ancient magic and early-twentieth century technology. A compelling book that I read in a single sitting and highly recommend."—Garth Nix, New York Times bestselling author of Sabriel and the Seventh Tower series

"Cory Doctorow told me I would love this, and he was so right!"—Ellen Kushner