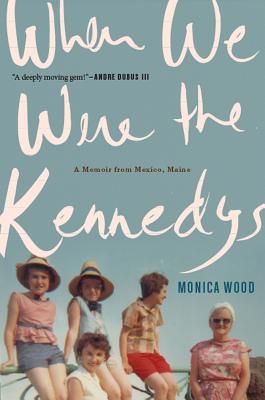 When We Were the Kennedys

A Memoir from Mexico, Maine

“Wood's memoir is a compelling tale of loss on many levels. She recounts the tragedy of the unexpected death of her father and also the loss of a way of life with the slow dying of the town's mill that has sustained its citizens for generations. Her mother's fascination with the stoicism of the Kennedys after the death of the President foreshadows the family's ability to deal with the abrupt loss of their husband and father. This book is a moving tale - sad, yet funny, as Monica shares her story of growing up in a small town with all of the various folks who helped shape her life.”
— Barbara Kelly, Portland Bookstore, University of Southern Maine, Portland, ME
View the List

1963, Mexico, Maine. The Wood family is much like its close, Catholic, immigrant neighbors, all dependent on a father's wages from the Oxford Paper Company. Until the sudden death of Dad, when Mum and the four closely connected Wood girls are set adrift. Funny and to-the-bone moving, "When We Were the Kennedys" is the story of how this family saves itself, at first by depending on Father Bob, Mum's youngest brother, a charismatic Catholic priest who feels his new responsibilities deeply. And then, as the nation is shocked by the loss of its handsome Catholic president, the televised grace of Jackie Kennedy she too a Catholic widow with young children galvanizes Mum to set off on an unprecedented family road trip to Washington, D.C., to do some rescuing of her own. An indelible story of how family and nation, each shocked by the unimaginable, exchange one identity for another.
Monica Wood has written a gorgeous, gripping memoir. I don t know that I ve ever pulled so hard for a family. Michael Paterniti, author of "Driving Mr. Albert


Praise For When We Were the Kennedys: A Memoir from Mexico, Maine…

"Every few years, a memoir comes along that revitalizes the form, that takes us by the hand and leads us into the dream world of our collective past from which we emerge more wholly ourselves. With generous, precise, and unsentimental prose, Monica Wood brilliantly achieves this, bringing back to life the rural paper mill town of not only her youth but America's, too, its bumbling, hard-working, often violent, yet mostly good-hearted lurch forward into the 21st century. When We Were the Kennedys is a deeply moving gem!"—Andre Dubus III, author of House of Sand and Fog and Townie

"This is an extraordinarily moving book, so carefully and artfully realized, about loss and life and love.  Monica Wood displays all her superb novelistic skills in this breathtaking, evocative new memoir.  Wow."—Ken Burns, filmmaker

"Monica Wood has written a gorgeous, gripping memoir. I don't know that I've ever pulled so hard for a family. When We Were the Kennedys captures a shimmering mill-town world on the edge of oblivion, in a voice that brims with hope, feeling, and wonder. The book humbles and soars."—Mike Paterniti, author of Driving Mr. Albert

“Monica Wood is a stunning writer and When We Were the Kennedys a luminous and resonant achievement. If I were standing beside you, I would press this book into your hands.”—Lily King, author of The Pleasing Hour and Father of the Rain