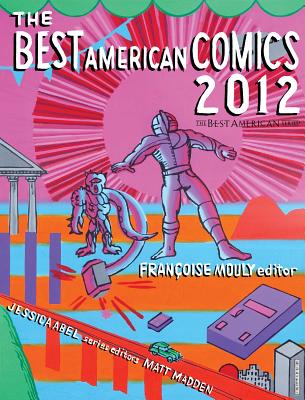 “When I started RAW magazine in the ’80s, there were mostly superheroes, a few children’s comics, and the dirty, intentionally lowbrow, underground comix. And now, comics can tackle any topic.”—Françoise Mouly, from the Introduction

This year with a sampler of comics for kids!

Françoise Mouly  has worked as the art editor for The New Yorker since 1993 and is the publisher and Editorial Director of TOON Books, an imprint of Candlewick Press. In 1980, Mouly founded the pioneering comics anthology RAW with her husband, Art Spiegelman. Born in Paris, she studied architecture at the Beaux Arts and moved to New York in 1974. She has been named chevalier in the order of Arts and Letters by the French Ministry of Culture and Communication, and in 2011, she was awarded France’s highest honor, the Legion of Honneur

MATT MADDEN is a cartoonist and the author of 99 Ways to Tell a Story: Exercises in Style. Together, they are the authors of Drawing Words & Writing Pictures.
or
Not Currently Available for Direct Purchase
Copyright © 2020 American Booksellers Association