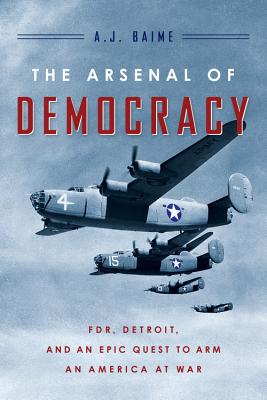 The Arsenal of Democracy

FDR, Detroit, and an Epic Quest to Arm an America at War


A dramatic, intimate narrative of how Ford Motor Company went from making automobiles to producing the airplanes that would mean the difference between winning and losing World War II. In 1941, as Hitler’s threat loomed ever larger, President Roosevelt realized he needed weaponry to fight the Nazis—most important, airplanes—and he needed them fast. So he turned to Detroit and the auto industry for help.

The Arsenal of Democracy tells the incredible story of how Detroit answered the call, centering on Henry Ford and his tortured son Edsel, who, when asked if they could deliver 50,000 airplanes, made an outrageous claim: Ford Motor Company would erect a plant that could yield a “bomber an hour.” Critics scoffed: Ford didn’t make planes; they made simple, affordable cars. But bucking his father’s resistance, Edsel charged ahead. Ford would apply assembly-line production to the American military’s largest, fastest, most destructive bomber; they would build a plant vast in size and ambition on a plot of farmland and call it Willow Run; they would bring in tens of thousands of workers from across the country, transforming Detroit, almost overnight, from Motor City to the “great arsenal of democracy.” And eventually they would help the Allies win the war.

Drawing on exhaustive research from the Ford Archives, the National Archives, and the FDR Library, A. J. Baime has crafted an enthralling, character-driven narrative of American innovation that has never been fully told, leaving readers with a vivid new portrait of America—and Detroit—during the war.

Praise For The Arsenal of Democracy: FDR, Detroit, and an Epic Quest to Arm an America at War…

"A.J. Baime’s prose is an amazing magic lantern shining through the flawed, frustrating and mesmerizing lives of an epic cast of characters; FDR; the anti-semitic Henry Ford; his gargoyle of a henchman Harry Bennett; the workers who would become America’s middle class; and, as well, Henry’s tragic son, Edsel, who lost his health and, ultimately, his life, trying to make good on his promise to deliver a "bomber an hour" during WWII. This is captivating history told at its most intimate level of detail; at the same time, Baime’s scope is grand and humane, even when he is bringing to life the most inhumane of people or moments. An engrossing, highly researched page-turner."
—Doug Stanton, author of In Harm’s Way and Horse Soldiers

"When you talk the history of Detroit, it's usually the stuff about beavers, the Model T, the '57 Chevy, the '67 riots and bankruptcy. But what A.J. Baime has done with a precise and entertaining pen is resurrect Detroit's most important era - WWII - and the obscure and tortured man who may have saved the world."
—Charlie LeDuff, author of Detroit: An American Autopsy

"Wars are fought on many fronts, and A.J. Baime chronicles this little known, but terrifically important battle to build America's bomber force with narrative zest and delicious detail. Put simply, it's a great read."
—Neal Bascomb, bestselling author of Hunting Eichmann and The Perfect Mile

"Fast-moving and rich with detail, Baime's book shows how the Fords worked a World War II miracle with rivets and steel. Engrossing."
—Stephan Talty, author of Agent Garbo and Empire of Blue Water

"A.J. Baime has a great way of telling a story. We didn't just win World War II because we had the best soldiers.We did it because we could build airplanes literally faster than the Germans could shoot them down. An exciting read."
—Jay Leno

“[Edsel Ford] has deserved a better legacy, and A.J. Baime has given it to him . . . The Arsenal of Democracy  is a touching and absorbing portrait of one of the forgotten heroes of World War II . . . A.J. Baime has given us a memorable portrait not just of an industry going to war but of a remarkable figure who helped to make victory possible.”
—Wall Street Journal

"A.J. Baime has a gift for taking stories about cars and turning them into epic tales of man and his machine versus other man and his machine… The Arsenal of Democracy shows how capitalism and the American spirit really won WWII. You’ll never look at Detroit or our flag the same again."
—Inked

A. J. BAIME is the New York Times bestselling author of The Arsenal ofDemocracy: FDR, Detroit, and an EpicQuest to Arm an America at War, GoLike Hell: Ford, Ferrari, and Their Battlefor Speed and Glory at Le Mans, TheAccidental President: Harry S. Trumanand the Four Months That Changed the World, and Dewey Defeats Truman: The1948 Election and the Battle for America's Soul. Baime is a longtime regular contributor to the Wall Street Journal and his articles have also appeared in TheNew York Times, Popular Science, and Men’s Journal. He holds an MA in literature from NYU and currently lives in northern California.