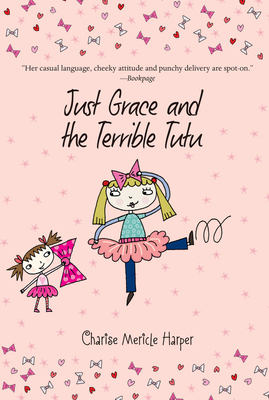 Just Grace and the Terrible Tutu (The Just Grace Series #6)

Grace is back to her zany antics again! Grace and Mimi have a secret: Mimi is going to be a big sister. To get ready, the girls try being "mother's helpers" to a family down the street, and Mimi begins to doubt her big sister abilities when 4-year-old Lily seems to like Grace best. But when Lily turns into a Terrible Tutu, Grace can't escape her! Can Grace use her empathy powers to shows Lily and Mimi the creative path towards a new friendship?

"This entertaining entrée into the world of chapter books will leave young readers laughing, pondering and eagerly anticipating Grace’s next adventure."—Bookpage

"Easy for readers to relate to, and her voice is consistently funny, frank, and believable."—The Horn Book

"Short chapters, frequent black-line illustrations, and Harper’s sure voice as the blossoming Grace mark this as one of the better series for emerging chapter-book readers."—Booklist

Just Grace and the Snack Attack

"[R]eaders will appreciate her straightforward, honest discussion of strong emotions they'll be sure to relate to." —Horn Book

"Girls who are settling into chapter book series featuring Clementine and Judy Moody will love the fast pace and familiar school and family situations. . . . Harper’s sketches add interest and break up the text, leaving the new reader time to pause and smile."—Horn Book

"Grace’s cartoon illustrations and charts enliven the conversational, first-person text. . . Her ruminations about the ways that people—and animals—may not be what they seem will provide both entertainment and food for thought for a wide range of readers."—Kirkus Reviews

"Harper's strength is her understanding of third-grade angst...she explores with a comic touch...Suggest this reassuring look at friendship and family to fans of Judy Moody and Clementine." —Booklist

"Dealing with the problems of friendship and change in a lively way...a good addition to the middle-grade shelves." —School Library Journal

*"The kids come alive in the story, and Harper, the author of several previous books, including the graphic novel Fashion Kitty (2005), enhances the comical goings-on with sparkling cartoon sketches. Equally delightful is the wry voice of energetic Just Grace, who never misses an opportunity to point out the injustices life has dealt her. She’s a hero through and through. Give this to fans of Ann Nagda’s Meow Means Mischief (2003) or anyone looking for a funny book." —Booklist, starred review

"Grace is a funny, mischievous protagonist who should easily find a place in the pantheon of precocious third graders. Fans of Amber Brown, Clementine, and Judy Moody will love her." —School Library Journal

Charise Mericle Harper is the author and illustrator of many books for children, including the Just Grace series and the Next Best Junior Chef series. Charise lives in Oregon. Visit Charise at chariseharper.com and on Twitter at @ChariseHarper.