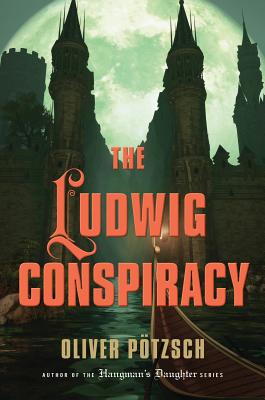 Ludwig II, the Fairy-tale King of Bavaria, is today remembered for his beautiful castles—popular tourist destinations that inspired the Disney Castle, but whose origins were much more fantastical than anything Disney could dream up. Also known as the Mad King, Ludwig was deposed in 1886 after being declared insane by doctors who had never met him. He promptly died—mysteriously drowned in waist-deep water—his eccentric castles his only legacy.

Master of historical suspense Oliver Pötzsch brings the Mad King back to life in The Ludwig Conspiracy. An encoded diary by one of Ludwig’s confidants falls into the hands of modern-day rare book dealer Steven Lukas, who soon realizes that the diary may bring him more misery than money. Others want the diary as well—and they will kill to get it. Lukas teams up with a beautiful art detective, Sara Lengfeld, to investigate each of Ludwig’s three famous castles for clues to crack the diary’s code as mysterious thugs and Ludwig’s fanatical followers chase them at every step. Just what in the diary could be so explosive?

Combining contemporary mystery and a gripping historical saga and centered on an ingenious code that can be cracked only with a combination of modern computers and nineteenth-century texts, The Ludwig Conspiracy is a bold new thriller from the best-selling author of The Hangman’s Daughter series.

Praise For The Ludwig Conspiracy…

"Pötzsch makes clever use of Bavaria’s equivalent of the Kennedy assassination in this excellent stand-alone . . . Pötzsch’s sophisticated plotting and good use of a real-life historical puzzle place this far ahead of most Da Vinci Code wannabes." -- Publishers Weekly, boxed and starred review"Intriguing, entertaining." -- Kirkus Reviews"Historical mystery fans and conspiracy theorists will find much to enjoy in this bizarre tale." -- Library Journal"This gripping thriller brings together the present and the past with high-action adventure in a bold, entertaining storyline." -- Shepherd Express