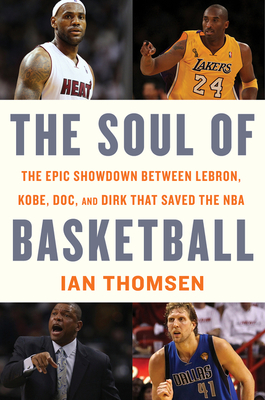 The Soul Of Basketball

The Epic Showdown Between LeBron, Kobe, Doc, and Dirk That Saved the NBA

The Soul of Basketball tells the story of an NBA prodigy, his league and their sport in the throes of crisis during the pivotal 2010-11 season. It began with The Decision, that infamous televised moment when uber-star LeBron James revealed that he was leaving the Cleveland Cavaliers – thereby distancing himself from his role model Michael Jordan – to pursue his first championship with his former opponents on the Miami Heat.

To the great fortune of LeBron, the NBA and basketball itself, the mission didn’t work out as planned. In the cultural tradition of Moneyball and Friday Night Lights, veteran NBA writer Ian Thomsen portrays the NBA as a self-correcting society in which young LeBron is forced to absorb hard truths inflicted by his rivals Kobe Bryant, Doc Rivers and Dirk Nowitzki, in addition to lessons set forth by Pat Riley, Gregg Popovich, Larry Bird, David Stern, Joey Crawford and many more.

This is about the making of a champion. Brimming with inside access, The Soul of Basketball tells the inspiring story of LeBron’s loneliest year, insecure and uncertain, when his ultimate foe was an unlikely immigrant who renewed the American game’s ideals. From Miami to Boston, Los Angeles to Dallas, Germany to the NBA’s Manhattan headquarters, the biggest names in basketball are driven by something more valuable than money and fame  – a quest that will pave the way for Stephen Curry, Kevin Durant and future generations to thrive.

Praise For The Soul Of Basketball: The Epic Showdown Between LeBron, Kobe, Doc, and Dirk That Saved the NBA…

“Ian Thomsen brings us the NBA like we’ve never seen it before: Gregg Popovich, anonymous, brilliant and alone, drinking a $160 bottle of wine at New York City bar to forget the season; the German trainer who built the exact specifications of Dirk Nowitzki’s jump shot on his computer; LeBron James and Kobe Bryant, finding their own paths as the successors to Michael Jordan. Intimate, lyrical and consistently revelatory, The Soul of Basketball is the story of a glossy multi-billion dollar league stripped to its essence.” –Steve Fainaru, ESPN Senior Writer and author of League of Denial and Big Boy Rules     "In his groundbreaking book The Soul of Basketball,  Ian Thomsen has crafted fascinating and revealing insights into a pivotal time in the NBA involving the game's biggest stars. This is a must read for all basketball junkies." –Jackie MacMullan, bestselling author of When the Game was Ours (with Larry Bird and Magic Johnson) and Shaq Uncut (with Shaquille O’Neal)   “Bravo! About time! Ian Thomsen provides an antidote to the fast-food, twitter feed of instant information consumption. Travel back to the 2010 NBA season, when LeBron and his two amigos arrived in Miami, when Dirk asserted himself in Dallas, when the league went through an economic and social convulsion. Marinate to see all the repercussions. Tell the tale with deft prose and snappy anecdotes and bring us all up to speed on what might come next. Great, great stuff.” –Leigh Montville, NYT bestselling author of The Big Bam and Sting Like a Bee    “If you think the NBA is strictly about talent, mixed in with some Xs and Os, and, oh, yes, the dreaded “A-word” — Analytics — guess again. Master reporter and dream writer Ian Thomsen reminds us the game is played with fascinating people, who bring both human greatness and vulnerability. Beginning with the folly of “The Decision,” Thomsen traces LeBron’s evolution from somewhat confused superstar to the multi-time champion he has become. In addition, he probes the psyches of Kobe Bryant, Dirk Nowitzki, Pat Riley and Doc Rivers, among others. What David Halberstam did for the NBA fan of the late 70s and 80s in “The Breaks Of The Game,” Thomsen does for contemporary NBA buffs.” –Bob Ryan, author of Scribe: My Life in Sports     “Ian Thomsen is the perfect writer to show us "The Soul of Basketball.'' While baseball grew old, and the NFL dealt with multiple crises, the NBA has emerged as America's game of the present and future. Riding sidecar with LeBron James, Kobe Bryant and Gregg Popovich, Ian was there for all of it and tells us how the NBA became our national pastime.”—Dan Shaughnessy, bestselling author of Francona (with Terry Francona)   "A fine work of sports journalism and a must for every bookish roundball fan."—Kirkus Reviews, starred review   "Thomsen’s ability to get personal, especially with unlikely sources, will hook readers . . . By thoughtfully plumbing the NBA’s biggest names, Thomsen offers a fascinating, thorough look at pro basketball’s continuing evolution to becoming the 'sport of the American Dream.'"—Publishers Weekly   "Insightful, deeply researched."—D Magazine —

Ian Thomsen has been writing about sports in America and around the world for three decades on behalf of the Boston Globe, The National Sports Daily, the International Herald Tribune, Sports Illustrated and NBA.com. He was courtside for the three NBA Finals of Magic Johnson versus Larry Bird, and in Barcelona when they joined with Michael Jordan on the original Dream Team. Since 2000 he has been focusing exclusively on the NBA from his base in Boston, Massachusetts.