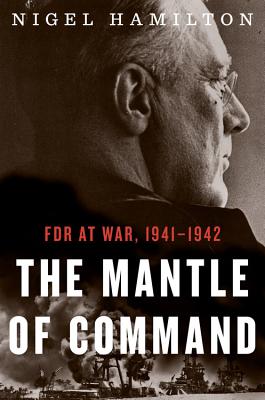 The Mantle of Command

Based on years of archival research and interviews with the last surviving aides and Roosevelt family members, Nigel Hamilton offers a definitive account of FDR’s masterful—and underappreciated—command of the Allied war effort. Hamilton takes readers inside FDR’s White House Oval Study—his personal command center—and into the meetings where he battled with Churchill about strategy and tactics and overrode the near mutinies of his own generals and secretary of war.

Time and again, FDR was proven right and his allies and generals were wrong. When the generals wanted to attack the Nazi-fortified coast of France, FDR knew the Allied forces weren’t ready. When Churchill insisted his Far East colonies were loyal and would resist the Japanese, Roosevelt knew it was a fantasy. As Hamilton’s account reaches its climax with the Torch landings in North Africa in late 1942, the tide of war turns in the Allies’ favor and FDR’s genius for psychology and military affairs is clear. This intimate, sweeping look at a great president in history’s greatest conflict is must reading.

"The Mantle of Command is splendid: It’s the memoir Roosevelt didn’t get to write."
—New York Times Book Review

"FDR has frequently been underestimated as a military leader, yielding, in the historical imagination, to George Marshall and Winston Churchill, among others. Nigel Hamilton attacks this view with his characteristic verve, portraying a president with the reins of war fully, if often subtly, in his hands. The conventional wisdom will never be the same."
—H.W. Brands, author of Traitor to His Class: The Privileged Life and Radical Presidency of Franklin Delano Roosevelt

"Nigel Hamilton’s Mantle of Command is a stirring and noteworthy book about Roosevelt’s crucial role as commander-in-chief during World War II. Hamilton writes with insight, passion, and a great grasp of history. I believe this book will become the standard by which other books about FDR’s role in World War II will be measured." — Carlo D’Este, author of Patton: A Genius for War and Warlord: A Life of Churchill at War, 1874–1945

"This is not the Roosevelt (or Churchill) you'd expect. From the start, an aggressive, in-charge FDR emerges from a wonderful weaving of established scholarship and the fascinating bits and pieces that make history live. Churchill is an inspirational nag, with a busy, unfocused strategic vision. A key entry into the ongoing debate over who made grand strategy in the early war years — Roosevelt or Churchill?" — Warren F. Kimball, author of Forged in War: Roosevelt, Churchill, and the Second World War

"Nigel Hamilton in Mantle of Command presents a very different wartime Franklin Delano Roosevelt than the one we are used to seeing. Whether or not one agrees with all his conclusions, Hamilton clearly shows that FDR was an extremely strong and effective commander-in-chief. This volume should go a long way to dispelling popular myths about Roosevelt as a naïve and weak war leader."
— Mark Stoler, editor of the George C. Marshall Papers & Professor Emeritus of History, University of Vermont

"Nigel Hamilton has written a spirited and thoughtful ‘revisionist’ study of Franklin Delano Roosevelt as commander-in-chief during the first phase of U.S. involvement in the Second World War. Hamilton’s narrative skill brings alive the human dramas, logistic hurdles, and strategic debates to show how FDR’s indispensable drive and forward-looking leadership tamed his own ‘team of rivals’ and set the United States and its Allies on the road to victory over the Axis. The books enlivens the often murky worlds of bureaucratic struggle and military detail to demonstrate how important it was for the United States to ‘get it right’ early in the war and how FDR accomplished this."
—Michael Schaller, author of Douglas MacArthur & Regents Professor of History, University of Arizona

NIGEL HAMILTON is a best-selling and award-winning biographer of President John F. Kennedy, General Bernard “Monty” Montgomery, and President Bill Clinton, among other subjects. His most recent book, The Mantle of Command: FDR at War, 1941–1942, was long-listed for the National Book Award. He is a senior fellow at the McCormack Graduate School, University of Massachusetts, Boston, and splits his time between Boston, Massachusetts, and New Orleans, Louisiana.
Loading...
or
Not Currently Available for Direct Purchase