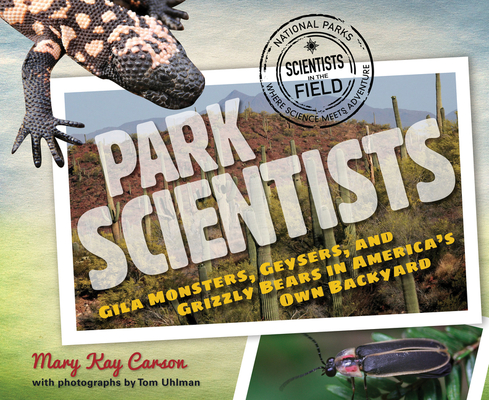 Gila Monsters, Geysers, and Grizzly Bears in America's Own Backyard (Scientists in the Field Series)

America's National Parks are protected places and have become living museums for as many as 270 million visitors per year! In addition, researchers are able to perform long term studies of a wide number of subjects from salamanders the size of thumbnails to gigantic geothermal geysers. These parks are natural laboratories for scientists. Did you know that Yellowstone National Park in Wyoming sits on top of an active (and very large) volcano? This volcano is monitored and studied on a daily basis, not only as a means of protection (though it seems a long way off from erupting) but also as a way of understanding how the environment changes and influences what goes on deep underground.

The scientists profiled in The Park Scientists also study grizzly bears in Yellowstone, the majestic Sagauro catci in Arizona, and fireflies in Tennessee -- and suggest many ways for the average reader of any age to help out. The emphasis here is twofold: the great science that happens everyday in these important, protected spaces, and the fact that you can visit all of them and participate in the research.

It's backyard science at its biggest and best in this resourceful addition to the Scientists in the Field series!


Praise For Park Scientists: Gila Monsters, Geysers, and Grizzly Bears in America's Own Backyard (Scientists in the Field Series)…

"With a conversationist bent, Carson describes just how accessible these real-life 'natural laboratories and living museums' are and how each individual can act with the same spirit of inquiry as the scientist-explorers detailed here."
—Booklist

"Kids anticipating a trip to one of these parks may want to study up now and show off their impressive vocabularies when they arrive."
—Bulletin