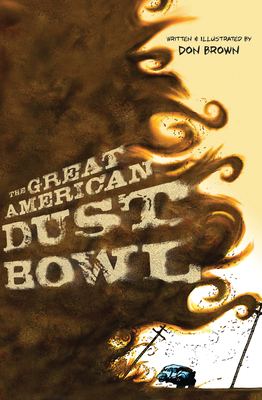 A speck of dust is a tiny thing. In fact, five of them could fit into the period at the end of this sentence.

On a clear, warm Sunday, April 14, 1935, a wild wind whipped up millions upon millions of these specks of dust to form a duster—a savage storm—on America's high southern plains.

The sky turned black, sand-filled winds scoured the paint off houses and cars, trains derailed, and electricity coursed through the air. Sand and dirt fell like snow—people got lost in the gloom and suffocated . . . and that was just the beginning.

Don Brown brings the Dirty Thirties to life with kinetic, highly saturated, and lively artwork in this graphic novel of one of America's most catastrophic natural events: the Dust Bowl.

* "From its enticing, dramatic cover to its brown endpapers to a comical Grant Wood-esque final image, this is a worthy contribution to the nonfiction shelves." —Kirkus, starred review   "A magnificent overview of this chapter in U.S. history." —School Library Journal   "The tale of the decade-long drought that laid waste to American plains and ruined the lives of countless farmers is a somber read, but Brown devotes himself to telling it well." —Publishers Weekly   * "Anyone looking for an exemplar of how comics can bring a true story compellingly to life—with depth and sophistication—need look no further than Don Brown's account of the epic natural disaster of the 1930s, the Dust Bowl." —The Bulletin of the Center for Children's Books, starred review   * "Concise and clear in imagery, text, and layout, Brown's nonfiction examination of the Dust Bowl contextualizes its genesis in geological and cultural history, the dynamics of its climatological presentation, and the affects on both the landscape and Depression-era High Plains farmers. . . . a complete visual package." —Booklist, starred review   * "This is a solid nonfiction graphic-novel debut." —The Horn Book Magazine, starred review   "[A] careful and grim account of an environmental catastrophe." —The New York Times Book Review —