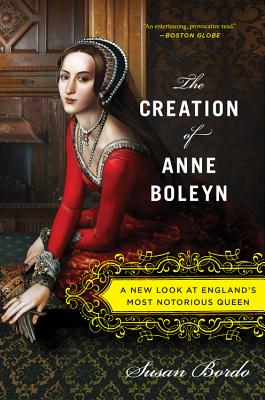 The Creation Of Anne Boleyn

A New Look at England's Most Notorious Queen

“Bordo’s sharp reading of Boleyniana and her clear affection for this proud, unusual woman make this an entertaining, provocative read.”—Boston Globe

Part biography, part cultural history, The Creation of Anne Boleyn is a reconstruction of Boleyn’s life and an illuminating look at her very active afterlife in the popular imagination. With recent novels, movies, and television shows, Anne has been having a twenty-first-century moment, but Bordo shows how many generations of polemicists, biographers, novelists, and filmmakers have imagined and reimagined her: whore, martyr, cautionary tale, proto-“mean girl,” feminist icon, and everything in between. Drawing on scholarship and razor-sharp analysis, Bordo probes the complexities of one of history’s most intriguing women, teasing out what we actually know about Anne Boleyn and what we think we know about her.

“Riveting . . . Bordo’s eloquent study not only recovers Anne Boleyn for our times but also demonstrates the ways in which legends grow out of the faintest wisps of historical fact.” —Book Page


Praise For The Creation Of Anne Boleyn: A New Look at England's Most Notorious Queen…

"Engrossing....Ms. Bordo offers a fascinating discussion. . . . a strangely tasty book."
—The New York Times "Bordo’s sharp reading of Boleyniana and her clear affection for this proud, unusual woman make this an entertaining, provocative read."
—The Boston Globe "A fascinating and accessible study of Anne Boleyn's history and popular myth."
—Shelf Awareness "A feast of feminism and history…fascinates readers, and informs and entertains along the way."
—Roanoke Times "Delightfully cheeky, solidly researched…[Bordo] uses her good sense and academic training to shrewdly chip away at historical commentary, which has hardened speculation into supposed "facts."
—The Daily Beast "Engrossing…blending biography, cultural history and literary analysis with a creative writer’s knack for narrative and detail."
—Louisville Leo Weekly "Rivetting…Bordo’s eloquent study not only recovers Anne Boleyn for our times but also demonstrates the ways in which legends grow out of the faintest wisps of historical fact, and develop into tangled webs of fact and fiction that become known as the truth. "
—Bookpage "Bordo’s skills are sharp as ever as she compares narratives from history and popular culture, revealing the bits of truth we know to be for certain about one of history's most elusive characters."
—Bitch Media   "The perfect book for anyone interested in Anne Boleyn. Highly readable, interesting and thought provoking."
—The Anne Boleyn Files "Susan Bordo's Boleyn did the impossible - it made me excited to read about the Tudors again while reminding me to approach history and historical fiction with curiosity and a questioning mind."
—Historical Fiction Notebook "The University of Kentucky humanities chair does a superb job of separating fact from fiction in contemporary accounts of Boleyn’s life, before deftly deconstructing the myriad and contradictory portraits of her that have arisen in the centuries since her death. . . . The young queen has been the source of fascination for nearly half a millennium, and her legacy continues; this engaging portrait culminates with an intriguing exploration of Boleyn’s recent reemergence in pop culture." —Publishers Weekly "A great read for Boleyn fans and fanatics alike"
—Kirkus Reviews "Susan Bordo astutely re-examines Anne’s life and death anew and peels away the layers of untruth and myth that have accumulated since. The Creation of Anne Boleyn is a refreshing, iconoclastic and moving look at one of history’s most intriguing women. It is rare to find a book that rouses one to scholarly glee, feminist indignation and empathetic tears, but this is such a book."
—Suzannah Lipscomb, author of 1536: The Year that Changed Henry VIII "If you think you know who Anne Boleyn was, think again. In this rigorously argued yet deliciously readable book, Susan Bordo bursts through the dead weight of cultural stereotypes and historical clichés to disentangle the fictions that we have created from the fascinating, elusive woman that Henry VIII tried—unsuccessfully—to erase from historical memory. This is a book that has long been needed to set the record straight, and Bordo knocked it out of the park. Brava!"
—Robin Maxwell, national bestselling author of Secret Diary of Anne Boleyn and Mademoiselle Boleyn “By turns sassy and serious, playful and profound, Susan Bordo cuts through the layers of legend, fantasy, and untruth that history and culture have attached to Anne Boleyn, while proving that the facts about that iconic queen are every bit as in —

Susan Bordo, Otis A. Singletary Professor in the Humanities at University of Kentucky, is the author of Unbearable Weight: Feminism, Western Culture, and the Body, a book that is still widely read and assigned in classes today. During speaking tours for that book, she encountered many young men who asked, "What about us?" The result was The Male Body: A New Look at Men in Public and in Private. Her work has been translated into many languages and frequently reprinted in collections and writing textbooks. A popular public speaker, Susan lives in Lexington, Kentucky, with her husband and daughter, and teaches humanities and gender studies at the University of Kentucky.
Loading...
or support indie stores by buying on