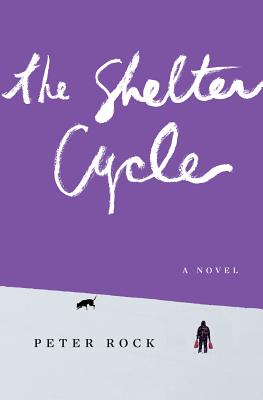 An American original, Peter Rock brings our strangest beliefs to vivid and sympathetic life in this haunting novel inspired by true events.

The Shelter Cycle tells the story of two children, Francine and Colville, who grew up in the Church Universal and Triumphant, a religion that predicted the world could end in the late 1980s. While their parents built underground shelters to withstand the impending Soviet missile strike, Francine and Colville played in the Montana wilderness, where invisible spirits watched over them. When the prophesized apocalypse did not occur, the sect’s members resurfaced and the children were forced to grow up in a world they believed might no longer exist.

Twenty years later, Francine and Colville are reunited while searching for an abducted girl. Haunted by memories and inculcated beliefs, they must confront the Church’s teachings. If all the things they were raised to believe were misguided, why then do they suddenly feel so true?

Praise For The Shelter Cycle…

"A remarkable, empathetic exploration of the nature of faith, meaning and happiness."
—Laura Miller, Salon

"A beautifully lyrical, brooding and haunting tale of faith and faithfulness on the edge of civilization as we know it."
—Shelf Awareness

"Peter Rock further demonstrates his literary finesse with this intense novel about two people who grew up with a spiritual clan bracing for the apocalypse. . . The real beauty in Rock’s narrative lies not in the carefully revealed secrets, but in the curious humanity within each of them."
—Publishers Weekly, starred review

"A metaphysically haunting, shape-shifting novel that keeps the reader off balance and can't be fully appreciated until its climax."
—Kirkus Reviews, starred review

PETER ROCK is the author of several novels, including My Abandonment, and a collection of stories, The Unsettling. He teaches writing at Reed College.
Loading...
or
Not Currently Available for Direct Purchase