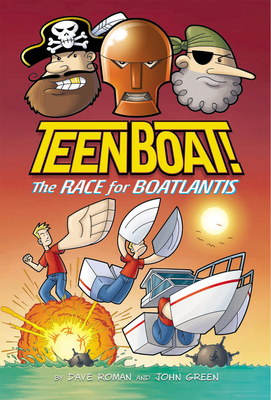 Teen Boat! The Race For Boatlantis

Teen Boat has always felt different from the other kids, which makes sense, since he’s the only one who can transform into a yacht.

Now, just before his high school graduation, he embarks on an epic quest of self-discovery. He learns of a mysterious city called Boatlantis, where boats are at the top of the social ladder. Can it be true? Has he finally found the place where a half boy/half boat belongs? Or will he always be torn between two worlds?

“While I am not the John Green who illustrated this book, I am a John Green who ABSOLUTELY LOVES the unadulterated brilliance that is Teen Boat!” —John Green, author of The Fault in Our Stars

The ANGST of being a Teen—the THRILL of being a Boat! For more laughs, don't miss the first book, Teen Boat!


Praise For Teen Boat! The Race For Boatlantis…

"Younger teens and tweens will enjoy the numerous boat puns and the bright, cheerful cartoon illustrations. With its wholesome hero and high school love triangles, this work is 'Archie' with boats. A light, silly read with middle school appeal." — School Library Journal

"Exactly as ridiculous as it ought to be." — Kirkus Reviews

“So much fun! Teen angst, star-crossed romance, nautical puns, missing parents, evil villains, and the secret of the mysterious world of talking boats, Teen Boat 2 has it all. And gorgeously illustrated, too.” — Faith Erin Hicks, Eisner Award-winning author of The Adventures of Superhero Girl

“Teen Boat is hilarious, beautifully drawn, and makes me nostalgic about high school. It is exactly the kind of comic book my friends and I would laugh over and celebrate during lunchtime. I highly recommend it!” — Kazu Kibuishi, creator of the New York Times bestselling Amulet series

Dave Roman is the creator of the graphic novel series Astronaut Academy and Agnes Quill: An Anthology of Mystery. He has contributed stories to Comic Squad: Recess!,Explorer: The Lost Islands, and is the co-author of two New York Times bestselling graphic novels, X-Men: Misfits and The Last Airbender: Zuko’s Story. He is also the writer of Jax Epoch and the Quicken Forbidden, which he co-created with John Green when they were students at the School of Visual Arts. Dave worked as an editor for the groundbreaking Nickelodeon magazine and lives in New York City with his wife and fellow cartoonist, Raina Telgemeier. See more of Dave’s work at www.yaytime.com

John Green grew up on Long Island and has worked in New York City since graduating from the School of Visual Arts with a degree in graphic design. He was the comics consultant for Disney Adventures magazine and has also worked on comics for Nickelodeon, DreamWorks, Scholastic, DC Comics, and First Second Books. His latest project is Hippopotamister, his first graphic novel as both writer and artist. John lives in Brooklyn, and you can see more of his work at www.johngreenart.com.