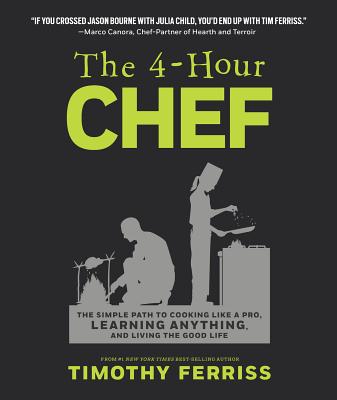 1. META-LEARNING. Before you learn to cook, you must learn to learn. META charts the path to doubling your learning potential.
2. THE DOMESTIC. DOM is where you learn the building blocks of cooking. These are the ABCs (techniques) that can take you from Dr, Seuss to Shakespeare.
3. THE WILD. Becoming a master student requires self-sufficiency in all things. WILD teaches you to hunt, forage, and survive.
4. THE SCIENTIST. SCI is the mad scientist and modernist painter wrapped into one. This is where you rediscover whimsy and wonder.
5. THE PROFESSIONAL. Swaraj, a term usually associated with Mahatma Gandhi, can be translated as “self-rule.” In PRO, we’ll look at how the best in the world become the best in the world, and how you can chart your own path far beyond this book.

Praise For The 4-Hour Chef: The Simple Path to Cooking Like a Pro, Learning Anything, and Living the Good Life…

“Tim Ferriss distills kitchen wisdom like a rotary evaporator on power surge. The results are potent, lucid, and delicious.”
— Nick Kokonas, Co-Owner, Alinea, Next, The Aviary

“Wildly inventive.. [a] rangy, obsessive immersion in food and its many wonders. [T]he tools needed to learn to cook well can be deployed in every manner of endeavor, from skinning a deer to memorizing a deck of cards. The author distills them into minimal, learnable units and examines how to order the units so as to keep readers engaged in their endeavors. Ferriss is a beguiling guide to this process, at once charmingly smart aleck-y and deadly serious, and he aims to make readers knowledgeable and freethinking.” — Kirkus Reviews