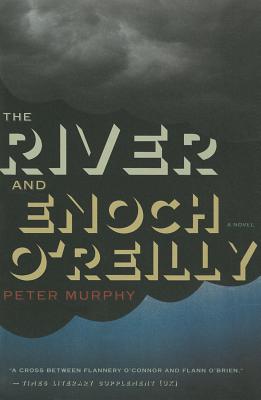 The River and Enoch O’Reilly

"This book is majestic and squalid at the same time, as if the Bible were actually about Elvis. The rhythms and music carry you like a baby on a raft on the river, but it's the precision of the words that cinches you."—Richard Hell, author of I Dreamed I Was a Very Clean Tramp

"A passionate dream of a book. Dazzling, but lucid—as though Flannery O'Connor had gone back to the Ireland of her forebears to write a novel."—Peter Behrens, author of The Law of Dreams

A small Irish town. A river flood. The return of a prodigal son. On the banks of the river Rua, when the rains have stopped and the waters receded, nine bodies are found. What took them to the river?

Enoch O’Reilly, a self-made preacher and Elvis impersonator claiming to be just returned to Ireland from America, launches a radio show Revival Hour. It enjoys a short but spectacular run, and its disastrous end forces Enoch back to the family home. There he finds clues to a mythic connection between the dead—this brotherhood of the flood—the natural rhythms of the earth, a secret language called riverish, and his lost father.

Conjuring together various traditions—gothic, Irish, Southern, musical, poetic, our deep connections to stories, to our homelands, and to nature—Peter Murphy establishes himself as one of Ireland’s literary wonders.

"A wild and inventive butt-kicker, but also strangely tender, and the language is charged, vivid, luminous."—Kevin Barry, author of City of Bohane

"Murphy can write like an angel, [but] his gaze is mischievous."— Irish Times

Praise For The River and Enoch O’Reilly…

"This book is majestic and squalid at the same time, as if the Bible were actually about Elvis. The rhythms and music carry you like a baby on a raft on the river, but it's the precision of the words that cinches you. Maybe best of all, it makes you think and argue, first with the author and then with everything around you."—Richard Hell "A passionate dream of a book. Dazzling, but lucid—as though Flannery O'Connor had gone back to the Ireland of her forebears to write this novel."—Peter Behrens, author of The Law of Dreams and The O'Briens "If this is a novel about 'how the young Enoch O'Reilly was possessed by the voice of the rambling man he would become,' then it's also a novel about fate and family. Murphy is sensitive to ways in which religious language fits neatly with familial ill-fatedness. . . Perhaps the thing that stops this from being a dull novel about the horrors of fate is that it is funny. Ornate, even grotesque, comic episodes are a significant part of its charm. . . Murphy moves into and out of various characters' voices with ease and grace. . . Both stories end in suicide, but both are wonderful portrayals of how we try to re-narrate ourselves and our lives, even if our new stories don't last long enough." —Spectator"Murphy’s fiction is by turns exploratory, riveting, ponderous and insightful. . . Shall We Gather at the River is by turns lucid and nightmarish." —Sunday Times (Ireland)"A purgatorial landscape that recalls Flann O'Brien by way of Patrick McCabe, Murphy's rural Ireland feels thrillingly unpredictable, if not downright malevolent. . . Murphy rightly eschews easy answers when it comes to explaining the tragedy and, at its best, his prose is as eerily hypnotic as the river of the book's title." —Metro"Peter Murphy's Shall We Gather at the River is a novel in full spate, a torrent of ideas bursting its banks with every turn of the page. . . Enoch O'Reilly makes for a fascinating character, one part Old Testament prophet to two parts daemonic succubus feasting on the misery of others." —Irish Examiner"It's hard to think of a more quintessentially Irish surname than O'Reilly. The name, with its jarring and yet oddly sonorous clash of Pentateuchal and Gaelic registers, seems to echo something fundamental about Murphy's book, which is a volatile hybrid of cultural influences. . . Enoch's true faith is, like that of the novel itself, language. . . One of the strengths of Shall We Gather at the River is the way in which its language - which is as in thrall to the poetry of the Old Testament as Enoch himself is - builds towards a cumulative lyrical effect. . . At its best, the book operates almost like a collection of linked short stories, and there are sections that stand alone as absorbing performances in their own right. The prose is both evocative and slippery, characterised by a kind of evasive bombast. There's an impressive section - a riff, really (Murphy is a heavily riff-based writer) - called 'The Why', in which the book's disembodied narrative voice speculates on what might have caused these suicides. . . There are enough moments of poignancy and lyrical force to make tuning in a worthwhile endeavour." —Sunday Business Post"[The River and Enoch O’Reilly] is brimming over with ideas, themes, characters and esoteric information. It contains evangelical preachers, father-son relationships, psychiatry, Middle Eastern flood myths. It also takes on one of the most difficult, delicate, painful subjects of contemporary life in Ireland and elsewhere: the occurrence of suicide clusters. . . The book pays heartfelt tribute to the power of radio and recorded sound. . . [Murphy’s] fiction is strongly informed by his own sense of place – and there’s nothing romantic about it. . . The portrait of nature as malign is turned up – as the rock fraternity might put it – to 11." —Irish Times"Weird pale kids who dress only in black and hang out in the woods all the time can sometimes turn into dark and deeply talented novelists like Peter Murphy - this second novel of his is a wild and inventive butt-kicker, but it's also strangely tender, and its language is charged, vivid, luminous." -- Kevin Barry, author of City of Bohane "Strong second novel...Murphy's language is powerful, and in particular uses wavelike repetition to good effect."--Publishers Weekly

PETER MURPHY, a writer and journalist, has written for Rolling Stone, the Sunday Business Post, and others. He has written liner notes for albums and anthologies, including for the remastered edition of the Anthology of American Folk Music, which features the Blind Willie Johnson recording of the song “John the Revelator.”