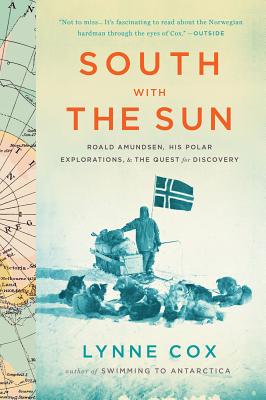 South with the Sun

Roald Amundsen, His Polar Explorations, and the Quest for Discovery

“This book is as autobiographical as it is biographical . . . a book that juxtaposes two adventurers, one with her own challenges still unfolding and the other with his position fixed in history . . . a book worthy of the centenary celebration of Amundsen’s trek to the South Pole.”—San Francisco Chronicle

Today the North and South Poles are home to research stations and film crews, but just a century ago they were forbidding lands seldom seen by human eyes. Those who journeyed there were the last true explorers, and one of the most successful ever was Roald Amundsen. Known as “the last of the Vikings,” the Norwegian-born Amundsen began his career of adventure at age fifteen and by forty had become the first man to successfully navigate the Northwest Passage, and to reach both the North and South Poles.

As a girl, Lynne Cox read of Amundsen’s exploits, which inspired her to follow her own adventurous dreams of open-water swimming. Here, she gives an account of Amundsen’s life and expeditions while detailing her own experiences swimming (without a wetsuit) in the same polar regions he first explored. At once a biography, history, and memoir, South with the Sun holds something for any lover of adventure.

“Not to miss . . . It's fascinating to read about the Norwegian hardman through the eyes of Cox.”—Outside

LYNNE COX has set records all over the world for open-water swimming. She was named a Los Angeles Times Woman of the Year, inducted into the International Swimming Hall of Fame, and honored with a lifetime achievement award from the University of California, Santa Barbara. She is the author of Swimming to Antarctica, which won an Alex Award. She lives in Los Alamitos, California.
Loading...
or support indie stores by buying on