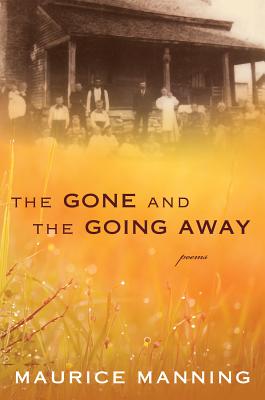 The Gone and the Going Away

Welcome to “Fog Town Holler,” Pulitzer Prize finalist Maurice Manning’s glorious rendering of a landscape not unlike his native Kentucky. Conjuring this mythical place from his own roots and memories — not unlike E. A. Robinson’s Tilbury Town or Faulkner’s Yoknapatawpha County — Manning celebrates and echoes the voices and lives of his beloved hill people.

In Fog Town Holler men have “funny names,” like Tiny Too and Eula Loom. A fox is known as Redleg Johnny. A neighbor issues a complaint against an early-rising rooster; another lives in the chicken coop. “Lawse,” a woman exclaims, “the sun can’t hardly find this place!” But they feel the Lord watching, always, as the green water of Shoestring Branch winds its way through hillbilly haunts and memories.

The real world no longer resembles the one brought so vividly to life in the poems in these pages, but through his meditations on his boyhood home, Manning is able to recapture what was lost and still, yet, move beyond it. He brings light to this place the sun can’t find and brings a lost world beautifully, magically, once again into our present.

Praise For The Gone and the Going Away…

"[Manning is] the literary guardian of a way of life he feels is vanishing from small-town Kentucky and America... [“The Gone and the Going Away”] maintains his fidelity to rural themes, recapturing a lost world for readers to remember and preserve....Although Manning has been lauded throughout the country for his work — garnering accolades from some of the major poets of our time, like W.S. Merwin, in addition to the numerous awards he has received — he has found his place in this literary life, wearing it now as effortlessly as the patterned chambray shirts he favors. He is a man of the people, intent on bringing poetry and scenes of rural beauty to them, words of the past, but also the present — the poetry of preservation, of all of us."—Jason Howard, Leo Weekly

"I'm no smarty-pants about poetry, but I do like words and I like good folks. It took just two lines into the opening poem in Maurice Manning's collection called The Gone and the Going Away, and I knew I was headed for some good words about interesting folks. . .This collection is a world I expect to dip into regularly."—Julie Isgrigg, Indie Fresh Press