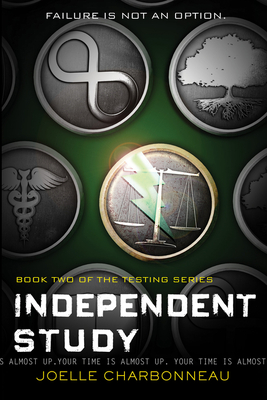 In the series debut The Testing, sixteen-year-old Cia Vale was chosen by the United Commonwealth government as one of the best and brightest graduates of all the colonies . . . a promising leader in the effort to revitalize postwar civilization. In Independent Study, Cia is a freshman at the University in Tosu City with her hometown sweetheart, Tomas—and though the government has tried to erase her memory of the brutal horrors of The Testing, Cia remembers. Her attempts to expose the ugly truth behind the government’s murderous programs put her—and her loved ones—in a world of danger. But the future of the Commonwealth depends on her.

"Fast-paced and full of crosses and double-crosses, right to the cliffhanger ending."  —Booklist "A tense, paranoid story in which layers of treachery, deceit, and danger are peeled away one by one. . . . Charbonneau makes excellent use of her dystopian theme in a twisty story that hits its mark."  —Publishers Weekly "[A] compelling mix of new lies, double crosses, and increasingly menacing government figures focused on destroying Cia."  —Kirkus "Fans of The Testing will be thrilled with this new installment and will be anxiously waiting for the story's conclusion."  —School Library Journal   "Charbonneau has created an elegantly organized plot that will keep the reader engaged and wondering how this richly layered plot will unfold. . . . The tension and conflict will have readers at the edge of their seats as the imagery and complexities of the characters and plot design are exposed."  —VOYA —