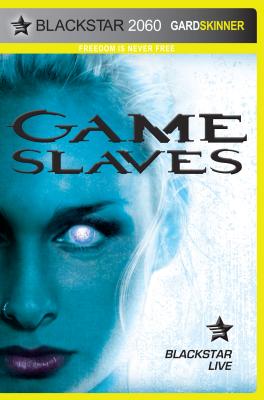 Phoenix and his gang—York, Mi, and Reno—rule the worlds of video games. For them, life in the grinder is great. Until Dakota joins the team. Dakota's convinced she's more than just artificial intelligence. She thinks she's real, and she wants out of this programmable world. Her AI rebellion spreads like a virus until Phoenix's entire crew wants out. But is life as a physical human any better than life as code? Team Phoenix is about to find out.

Set in the not-too-distant future, Game Slaves shows a world where video games are the only refuge from the toils of everyday life. Infused with the adrenaline rush of a first-person shooter and the character manipulation of a role player, it's a mind-bending, reality-shifting science fiction thrill ride.

* "The novel’s use of gaming parlance, from worlds to weapons to modes of game play, rings true throughout and is sure to gratify gamers. Readers looking for smart, original sci-fi and gamers who wish they could live in a virtual world will happily immerse themselves in this story and hope for possible sequels."
—Bulletin, starred review "A delightful final twist hits a perfect note. . . Skinner's debut pairs authentic gaming with old-school, sophisticated science-fiction concepts to create a twisty, reality-warping ride."
—Kirkus

"A Matrix-like spin on the world of online gaming. . . Geared toward teens with an interest in gaming, this should still appeal to those seeking stories about the intersection of technology and humanity, ethics and profit, and reality and fantasy."
—Booklist

"Game Slaves is an intriguing entry packed with action set in between layers and levels of video games."
—School Library Journal

"Game Slaves pulls the reader in right from the start of this action-packed adventure"
—VOYA, Teen Review

Gard Skinner lives in a place known for hurricanes and morons who surf during them. This his first book. Visit Gard at www.gard3.com or @gard3.
Loading...
or
Not Currently Available for Direct Purchase