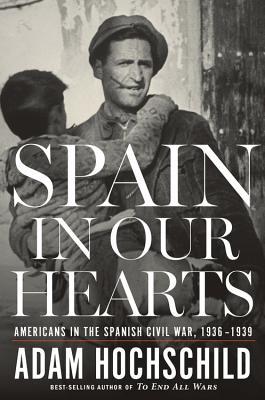 Spain in Our Hearts

From the acclaimed, best-selling author Adam Hochschild, a sweeping history of the Spanish Civil War, told through a dozen characters, including Ernest Hemingway and George Orwell: a tale of idealism, heartbreaking suffering, and a noble cause that failed

For three crucial years in the 1930s, the Spanish Civil War dominated headlines in America and around the world, as volunteers flooded to Spain to help its democratic government fight off a fascist uprising led by Francisco Franco and aided by Hitler and Mussolini. Today we're accustomed to remembering the war through Hemingway’s For Whom the Bell Tolls and Robert Capa’s photographs. But Adam Hochschild has discovered some less familiar yet far more compelling characters who reveal the full tragedy and importance of the war: a fiery nineteen-year-old Kentucky woman who went to wartime Spain on her honeymoon, a Swarthmore College senior who was the first American casualty in the battle for Madrid, a pair of fiercely partisan, rivalrous New York Times reporters who covered the war from opposites sides, and a swashbuckling Texas oilman with Nazi sympathies who sold Franco almost all his oil — at reduced prices, and on credit.

It was in many ways the opening battle of World War II, and we still have much to learn from it. Spain in Our Hearts is Adam Hochschild at his very best.

“Excellent and involving . . . What makes [Hochschild’s] book so intimate and moving is its human scale.”
—Dwight Garner, New York Times

"With all due respect to Orwell, Spain in Our Hearts should supplant Homage to Catalonia as the best introduction to the conflict written in English. A humane and moving book, it is well-paced and meant to be read rather than studied."
—New Republic

“The tragic story of the Americans in the doomed Lincoln Brigade . . . comes vividly to life in Adam Hochschild’s compelling ‘Spain in Our Hearts,’ a long-overdue book that explores this long-overlooked conflict.”
—Los Angeles Times

"By assembling a well-chosen set of individual narratives, many about figures who are relatively unknown, [Hochschild] captures why so many people thought the fate of the world might be decided by who won the conflict ... Consistently vivid ... Captivating."
—New York Times Book Review

"A vivid and level-headed new history of American participation in the Spanish Civil War."
—The New Yorker

“Excellent … Hochschild captures both the passionate, partisan views of particular combatants and the larger political currents that shaped their experiences. It’s a moving and useful investigation into the dangers and promises of idealism.”
— Christian Science Monitor

"The book’s narrative is driven by Hochschild’s deft handling of the personal stories, some heartbreaking, of a half dozen Americans . . . highly engaging . . .  A book like Hochschild’s keeps their stories and spirit alive."
—St. Louis Post-Dispatch

“A sweeping, suspenseful, and somber chronicle of the Spanish Civil War … Mak[es] superb use of diaries and letters.”
— Minneapolis Star-Tribune

“A fine new chronicle of Americans … determined to do their part to fight fascism. One’s heart breaks to read what awaited them.”
— Dallas Morning News

“Brings history alive … Hochschild is a writer capable of making any topic interesting, relevant, and accessible … Spain in Our Hearts is a primer, a meditation, and a story of American adventure abroad.”
— Tampa Bay Times

“Well-paced … Closes on a poignant note of mourning and remembrance.”
— Boston Globe

“Hochschild is an exceptional writer; his narrative is well-paced, delivered in clear prose, and focused on important and colorful details of the historical moment.”
—Publishers Weekly, starred review

"A nuanced look at the messy international allegiances forged during the Spanish Civil War . . . Hochschild ably explores subtle shades of the conflict that contemporary authors and participants did not want to consider."
—Kirkus Reviews

“George Orwell once explained that going to Spain, in 1936, ‘seemed the only conceivable thing to do.’ As soon as he got there, the right thing to do got a lot less clear. And how to write about it was immediately difficult, too. The twenty-eight hundred Americans who fought in the Spanish Civil War felt the same way, as Adam Hochschild recounts in this rich and fascinating book. Few writers grapple so powerfully with the painful moral and ethical choices of past actors as does Hochschild, who brings to Spain in Our Hearts his exceptional talents — and his moral seriousness — as a reporter, as a historian, and as a writer.”
—JILL LEPORE, author of The Secret History of Wonder Woman

“In this beautifully written portrait of Americans caught up in the Spanish Civil War, Adam Hochschild brings to brilliant life the heroism and horror of that fratricidal conflict. His account of the David-and-Goliath fight between the ragtag army of idealistic, pro-democracy  volunteers and the mechanized, murderous forces of Franco, Hitler, and Mussolini is one of the most powerful narratives I have ever read.”
—LYNNE OLSON, author of Citizens of London

“Spain in Our Hearts is narrative non-fiction at its very best. Hochschild’s achievement is to make this trial-by-combat story come alive, as if it were happening now. It is impossible for a reader not to identify and feel compassion for those sons and daughters of America who risked and often gave their lives for a cause that could not ultimately prevail against the darker forces of Franco, Hitler, Mussolini, Stalin – and Texaco. A seamlessly-woven, unputdownable tapestry of war in Europe; intensely, unforgettably moving.”
—NIGEL HAMILTON, author of The Mantle of Command

“Beautifully written with a hawk-eye for the telling anecdote, Spain in Our Hearts constitutes an endlessly fascinating and utterly unputdownable survey of the war to defend democracy in Spain that was not only the first act of the Second World War but also, for many across the world, the last great cause.”
PAUL PRESTON, author of The Spanish Civil War: Reaction, Revolution, and Revenge