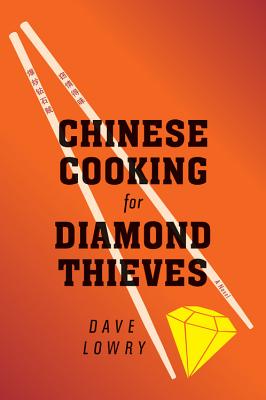 Driving home after being kicked out of college, Tucker meets and picks up the mysterious Corinne Chang at a rest stop. Infatuated, and with nothing better to do, he ends up with her in St. Louis, where he gets a job as a chef in a Chinese restaurant. Even though he’s a gwai lo—a foreign devil—his cooking skills impress the Chinese patrons of the restaurant, and his wooing skills impress Corinne when she joins him there as a waitress. But when Chinese gangsters show up demanding diamonds they believe Tucker’s kind-of, sort-of, don’t-call-her-a-girlfriend stole, he and his friends—which luckily include a couple of FBI agents—have to figure out just who is gunning for Corinne and how to stop them. Good thing Tucker is a Mandarin-speaking martial arts master who isn’t afraid to throw the first punch.

With its one-of-a-kind hero, Chinese Cooking for Diamond Thieves is perfect for anyone who loves cooking, Chinese culture, bad jokes, and young love. Diamonds are forever . . . unless Chinese mobsters decide they want them back.

"Lowry's wry debut combines a caper story with foodie culture in an entertaining mix...a zestful first novel." —Publishers Weekly "Lowry’s fast-paced tale is reminiscent of Kurt Russell’s Big Trouble in Little China, or an off-center Philip Marlowe from a Raymond Chandler story. That is, it’s a chaotic, intriguing, and fun read that delivers quite a punch." —Booklist"Lowry’s engaging first novel is as accomplished as its young hero—smart, skillful, self-possessed. And who wouldn’t love a hipster martial arts devotee who cooks authentic Asian cuisine? Warning: do not read this book without a good Chinese restaurant on speed-dial!" --Hilary Fields, author of Bliss"The clever and unique mix of martial arts, Chandler-worthy banter, mouth-watering feasts, and an extremely likable protagonist made me want join chef Tucker and his coterie for Chinese food and late-night sleuthing. Absolutely delicious." --Sarah Skilton, author of Bruised"Chinese Cooking for Diamond Thieves is a road-tripping love story spiced with snappy repartee and a dash of running-for-your-life, told by a memorable narrator who never picks up strangers at a highway rest stop -- unless they speak Mandarin. An enjoyable, witty, comic adventure that will also make you very, very hungry." --Kristina Riggle, award-winning author of The Whole Golden World

DAVE LOWRY is the restaurant critic for St. Louis Magazine and writes regularly for a number of magazines on a wide variety of subjects, many of them related to Japan and the Japanese martial arts. He is the author of numerous nonfiction books.
Loading...
or support indie stores by buying on